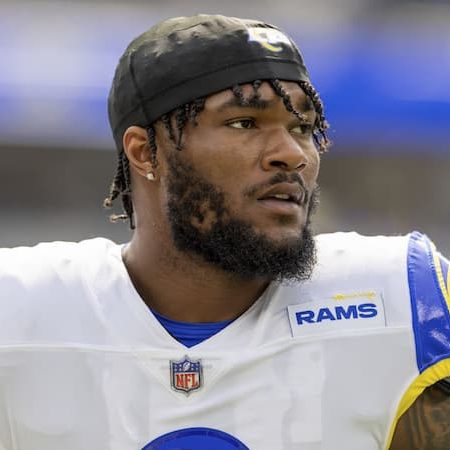 This article will answer every question you have about Cam Akers. Below are some of the frequently asked questions about him.

Who is Cam Akers?

Cam Akers is a professional American football running back for the Los Angeles Rams of the NFL (National Football League). While at college, he played college football at Florida State. He was drafted in the second round of the 2020 NFL Draft by the Rams.

How Old Is Cam Akers?

He is 23 years old as of October 2022, having been born on June 22, 1999, in Jackson, Mississippi, U.S. Cam shares his birthdate with celebrities such as; Zach Clayton, Stephen Yeager, Queen KhaMyra, Yammy, Sam Rybka, and many more.

Who are Cam Akers’s Parents?

He was born to Conni Akers (Father) and Angela Michael Neal (Mother).

Does Cam Akers have Siblings?

There is no news on the internet showing whether he has siblings r was born as an only child. In case there is news regarding this matter, we will update it here as soon as possible.

He played quarterback and running back at Clinton High School. As a senior, he rushed for 2,105 yards and 34 touchdowns and passed for 3,128 passing yards and 31 touchdowns. Overall in his high school career, he had 13,243 yards and 149 touchdowns. Moreover, he was named MS Gatorade Player of The Year. Also, he played in the U.S. Army All-American Bowl and in 2016 won the U.S. Army Player of the Year Award.

He was ranked as a five-star recruit and was ranked among the top recruits in his class. He committed to playing college football at Florida State University. During what was a generally forgettable 7-6 season, during the 2017 Independence Bowl, he set the team freshman record for rushing yards thus bringing his season total to 1,025 yards. This broke the previous record of 1,008 which was set by Dalvin Cook in 2014. He announced on December 14, 2019, he would be skipping the Sun Bowl to enter the 2020 NFL Draft.

He was drafted in the second round, 52nd overall in the 2020 NFL Draft by the Los Angeles Rams.

In a game against the Tampa Bay Buccaneers in week 11, he scored his first career touchdown on a four-yard reception in the third quarter in a 27-24 victory. In week 14 against the New England Patriots, he rushed for 171 yards on 29 attempts which marked the sixth-most rushing yards by any NFL player in a single game during the 2020 season and 4th-most by a Rams rookie in a single game in franchise history. The Rams went on to win the game by a score of 24-3. And Cam was named the NFC Offensive Player of the Week because of his performance in week 14. He rushed for 90 yards and a touchdown in the Divisional Round of the playoffs against the Green Bay Packers during the 32-18 loss.

He tore his Achilles tendon on July 20, 2021, while working out shortly before the start of training camp. Thus he was expected to be sidelined for the entirety of the 2021 season. Moreover, he was placed on the reserve/non-football injury list to start the season. However, on December 25, 2021, he was activated to the active roster, 5 months after his injury. He returned to action in week 18 in a game against the San Francisco 49ers where he rushed for 3 yards on 5 carries and caught 3 passes for 10 yards.

Cam Akers’s Salary and Net Worth