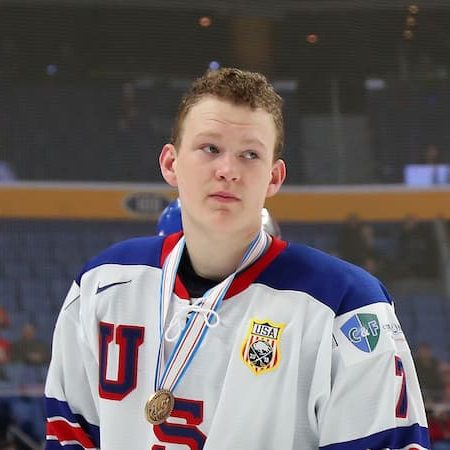 This article will answer every question you have about Brady Tkachuk. Below are some of the frequently asked questions about him.

Who is Brady Tkachuk?

Braeden “Brady” Tkachuk is a professional American-Canadian ice hockey left winger and captain of the Ottawa Senators of the NHL (National Hockey League). He was chosen in the 2018 NHL Entry Draft by the Senators as the fourth overall. Before turning professional, he played one season for the Boston University Terries, earning All-Hockey East Rookie Team honors. Moreover, he has played internationally representing Team USA at the 2017 IIHF World U18 Championships and the 2018 World Junior Ice Hockey Championships.

How Old Is Brady Tkachuk?

He is 23 years old as of October 2022, having been born on September 16, 1999, in Scottsdale, Arizona, U.S. Brady shares his birthdate with celebrities such as; Nick Jonas, Chase Stokes, Joji, Anthony Padilla, Alexis Bledel, and many more.

Who are Brady Tkachuk’s Parents?

Does Brady Tkachuk have Siblings?

He has an elder brother by the name, of Matthew Tkachuk (born on December 11, 1997) an American professional ice hockey winger.

He received his education at Boston University.

He is in a relationship with his girlfriend, Emma Farinacci (born on October 22, 2000).

After playing for the St. Louis AAA Blues U16 and committing to the USA Hockey National Team Development Program (USNDPT), he agreed to play for Boston University after completing two seasons with the USNPT. He had four goals and 14 points in 19 games as a freshman while playing for the university’s Boston Terries team, before making the U.S. under-20 national team for the 2018 World Junior Championships. Nearing the end of the season, he was selected for the Hockey East Rookie Team after ranking fifth on the team in points.

Leading up to the 2018 NHL Entry Draft, he was ranked 2nd overall for North American skaters by the NHL Central Scouting Bureau. Eventually, he was drafted 4th overall by the Ottawa Senators, and on August 13, 2018, he signed a three-year entry-level contract with the Senators, forgoing his collegiate career. However, he was sidelined for the Senators after participating in the Senator’s preseason games first two regular season games with a groin injury. On October 8, he eventually made his NHL debut in a 6-3 loss to the Boston Bruins. The following game on October 10, he recorded his first career NHL goal and first multi-goal game in a loss to the Philadelphia Flyers.

Thus he went on to become the fastest to record his first NHL goal surpassing his brother and father. After playing in four games for the Senators, on October 17, it was announced that he had a torn ligament in his leg and was set to be out for a month to recover. Eventually, on November 8, 2018, he returned to the Senators for a game against the Vegas Golden Knights. The next year on March 28, in a game against the Florida Panthers, he tied the Senators’ franchise record for most shots on goal in a game with 12.

In the same game, he scored his 20th goal of the season to tie Alexandre Daigle for the Senators’ record for most goals by a teenage player in a season. Overall, he finished the 2018-19 season with 22 goals, the second-highest among NHL rookies behind Elias Pettersson’s 28. On January 22, 2020, he was selected to replace the injured Auston Matthews on the Atlantic Division roster for the 2020 NHL All-Star Game. He then signed a seven-year $57.5 million contract with the Senators on October 14, 2021. On November 5, he was named the 10th captain in Senators franchise history.

In addition to playing hockey at the club level, he also has played hockey internationally. He was the captain of the gold-winning U.S. under-18 national team at the 2017 IIHF World U18 Championships. Also, he was selected to the U.S. under-20 national team for the 2018 World Junior Ice Hockey Championship in Buffalo, New York, winning bronze.

Brady Tkachuk’s Salary and Net Worth

He has an annual salary of $6.5 million and a net worth of around $10 million.