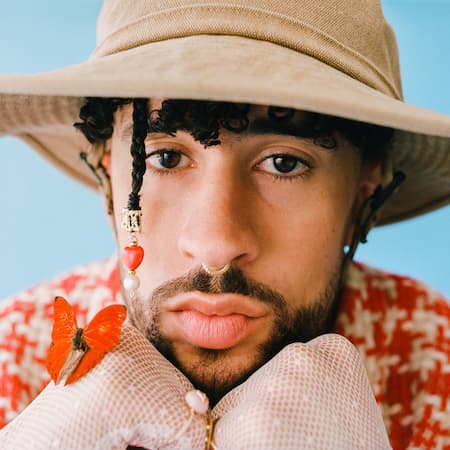 This article will answer every question you have about Bad Bunny. Below are some of the frequently asked questions about him.

Who is Bad Bunny?

Benito Antonio Martinez Ocasio professionally known as Bad Bunny is a Puerto Rican famous rapper and singer. His music is defined as Latin trap and reggaeton. He became the first non-English language act to be Spotify’s most streamed artist of the year.

How Old Is Bad Bunny?

He is 28 years old as of August 2022, having been born on March 10, 1994, in Almirante Sur, Vega Baja, Puerto Rico. Bad Bunny shares his birthdate with celebrities such as; Chad Wild Clay, Malachi Barton, Carrie Underwood, Olivia Wilde, and many more.

Who are Bad Bunny Parents?

He was born to Tito Martinez (Father) was a truck driver and Lysaurie Ocasio (Mother) a retired schoolteacher.

Does Bad Bunny have Siblings?

He received his education at The University of Puerto Rico – Arecibo Campus.

He is currently dating Gabriela Berlingeri, a jewelry designer.

At the age of 14, he started to write and create his own interpretations until 2013 when he began to publish his songs through SoundCloud. This included “Get” in 2013, “Tentacion” in 2014, and “Just let me know” in 2015, among others. His song “Diles” caught the attention of DJ Luian from SoundCloud in 2016, who signed him to his record, Hear this Music. His single “Soy Peor” reached No. 19 on the Hot Latin Songs chart. Bad Bunny May 2017 collaboration with Karol G, “Ahora Me Llama” reached No. 10 on the Billboard Hot Latin Songs chart. Moreover, it was listed on “Alt. Latino’s Favourites: The Songs Of 2017” as one of the best Latin songs of 2017. In the summer of 2017, he signed a booking deal with Cardenas Marketing Network (CMN) for several Latin American countries.

American rapper Cardi B released a collaboration with Bad Bunny and J Balvin “I Like It” in May 2018. That same year on October 11, he released “Mia” with Drake which reached No. 5 on the Billboard Hot 100. On December 24, 2018, he released his debut X 100pre on Christmas Eve 2018 on Rimas Entertainment. At Metacritic, X 100pre received an average score of 84 based on five reviews. In 2020, X 100pre was voted 447th in Rolling Stone’s 500 Greatest Albums of All Time. Bad Bunny went on to release Oasis, an eight-song collaborative album with J Balvin on June 28, 2019. It peaked at No. 9 on the Billboard Hot 100 and topped the Billboard US Latin Albums chart. In July 2019, he joined protests against governor Ricardo Rossello.

He was a guest performer at the Super Bowl LIV halftime show in February 2020, headlined by Shakira and Jennifer Lopez. On February 27, 2020, he announced the album YHLQMDLG, during an appearance on The Tonight Show Starring Jimmy Fallon and stated that it would be released on Leap Day 2020. The album was released on February 29, 2020. The album’s title stands for “Yo Hago Lo Que Me Da La Gana” (Spanish for “I Do What I Want”) and features collaborations with Daddy Yankee, Yaviah, Jowell & Randy, and Nengo Flow, among other artists.

YHLQMDLG debuted at No. 2 on the US Billboard 200, thus becoming the highest-charting all-Spanish album ever on the chart at the time. On November 22, 2019, “Vete” was released as the lead single of the album. The second single “Ignorantes” with Panamanian singer Sech came out on February 14, 2020. That same year in March, he released the music video for “Yo Perreo Sola” in which the artist performs in drag. He went on to release another song “En Castilla” on SoundCloud on April 4, 2020. On May 10, 2020, he released his third solo studio album (fourth overall) Las que no iban a salir without previous announcements.

In July 2020, he appeared on the first digital cover of Playboy magazine as the first man to appear on the cover other than the magazine’s founder Hugh Hefner. Moreover, he received the ASCAP Latin award for Songwriter of the Year. His song “Pero Ya No” appeared the following month in an advertisement for politician Joe Biden’s 2020 United States presidential election campaign. Next, he released the single “Dakiti” with Jhay Cortez in October 2020. The single topped the Billboard Global 200 and reached number five on the US Hot 100. On November 27, 2020, the song is included on his third studio album, El Ultimo Tour Del Mundo.

The album became the first all-Spanish language album to reach No. 1 on the Billboard 200. He and YHLQMDLG respectively became Spotify’s most-streamed artist and album globally in 2020. The album went on to receive the Grammy Award for Best Latin Pop or Urban Album at the 63rd Annual Grammy Awards. Bad Bunny went on to perform “La Noche de Anoche” with Rosalia on February 20, 2021, and “Te Deseo Lo Mejor” on Saturday Night Live hosted by Rege-Jean Page. It was announced in July 2021, that he co-wrote and co-produced the fifth album of Puerto Rican Latin pop artist Tommy Torres titled El Playlist de Anoche.

At the 2021 Billboard Latin Music Awards, he won the most awards with ten, including the category Artist of the Year. That same year in September, he appeared in the Time 100, Time’s annual list of the 100 most influential people in the world. At the 22nd Annual Latin Grammy Awards, he won Best Urban Music Album and Best Rap/Hip Hop Song. Furthermore, El Ultimo Tour Del Mundo won Best Musica Urbana Album at the 64th Annual Grammy Awards. It was announced in December 2021, that Bad Bunny became Spotify’s most-streamed artist of the year globally for the second year in a row.

In January 2022, he was featured in Vogue Magazine for the second time modeling the current season’s best bags. Sony Pictures announced in April 2022, that Bad Bunny was the lead for El Muerto, a film set in Sony’s Spider-Man Universe. El Muerto is set to be released on January 12, 2024. Next, he released his fourth (fifth overall) studio album Un Verano Sin Ti on May 6, 2022. The album became commercially successful as it debuted at No. 1 on the Billboard 200 where it stayed at that spot for seven non-consecutive weeks. In August 2022, he will embark on his fourth concert tour World’s Hottest Tour.

A Career in Professional Wrestling

On January 31, 2021, during the WWE annual Royal Rumble, he performed his song “Booket T” live, which also had an appearance by the former wrestler of the same name. Thus he began appearing on WWE’s weekly television show Monday Night Raw. A fellow Puerto Rican wrestler, Damian Priest allied with Bad Bunny and helped him win the WWE 24/7 Championship from Akira Tozawa on the February 15 episode of Raw. He then relinquished the 24/7 Championship to R-Truth on the March 15 episode of Raw. This was in exchange for Stone Cold Steve Austin memorabilia and ended his reign of 28 days. At the Royal Rumble on January 29, 2022, he returned to WWE competing in the men’s Royal Rumble match. He went on to eliminate Sheamus and Dolph Ziggler and lasted until the final 5 when he was eliminated by the eventual winner Brock Lesnar.

Bad Bunny Salary and Net Worth

He has an annual salary of $4 million and a net worth of $18 million.