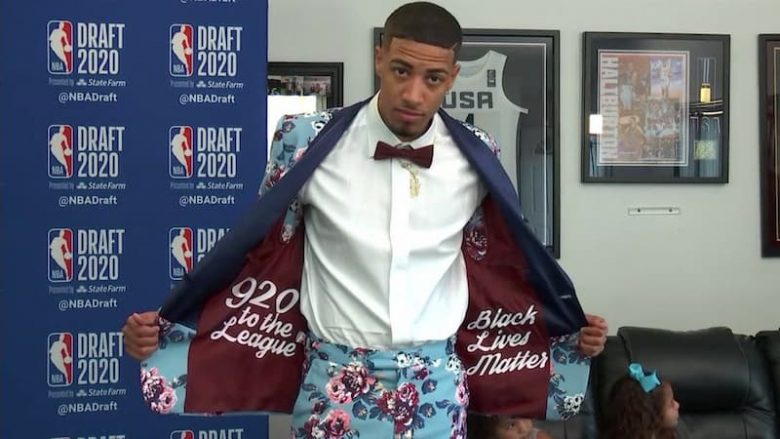 Who is Tyrese Haliburton?

Tyrese Haliburton is a popular American professional basketball player for the Indiana Pacers of the National Basketball Association (NBA). He played college basketball for the Iowa State Cyclones and currently plays the point guard position, listing at 6 feet 5 inches (1,96 m) and 185 pounds (84 kg).

Having been born in Oshkosh, Wisconsin, Tyrese was a consensus three-star recruit from Oshkosh North High School. He led the high school team to a state championship in his senior season. Haliburton then joined Iowa State and as a freshman, he set the program’s single-game assists record. He got his breakthrough success as a sophomore and was named to the second-team All-Big 12 Conference although he was suffering a season-ending wrist injury. Haliburton then guided the United States to a gold medal in 2019, earning all-tournament team honors at the FIBA Under-19 World Cup in Heraklion, Greece.

How old is Tyrese Haliburton?

Tyrese Haliburton is aged 21 as of 2021, having been born on February 29, 2000, in Oshkosh, Wisconsin, U.S. He shares his birthday with celebrities including Aileen Wuornos, Richard Ramirez, Tony Robbins, Ja Rule, Mark Foster, Dinah Shore, Dennis Farina, Emilia Clarke, among others.

Who are Tyrese Haliburton’s parents?

Tyrese Haliburton was born in Oshkosh, Wisconsin to John Haliburton, a referee, and his wife Brenda Haliburton. He has not revealed much information about his family to the media and keeps it private.

Does Tyrese Haliburton have siblings?

No information is available about Haliburton’s siblings in the media. He has kept his family and personal life very confidential and away from the limelight.

Haliburton is presently not married but is in a relationship. He is dating the love of his life girlfriend Jade Jones, who is a cheerleader. The two lovebirds have been spotted together many times posting pictures on his Instagram.

Haliburton and his girlfriend presently do not have any children together yet. They are still young in love and children are not their privilege for the moment.

Tyrese played basketball for Oshkosh North High School in Oshkosh, Wisconsin. He was named to the All-Fox Valley Association (FVA) second team and defensive team, as a sophomore. Haliburton averaged 18 points, 6 assists, and five rebounds per game. He earned FVA Player of the Year and Wisconsin Basketball Coaches Association (WBCA) Division I All-State accolades with his team falling just short of the State Tournament.

Haliburton averaged 22.9 points, 6.2 assists, 5.1 rebounds, 3.5 steals, and 1.7 blocks per game as a senior, leading Oshkosh North to a 26-1 record. He scored a career-high 42 points in a win against Kaukauna High School and West Virginia recruit Jordan Mccabe on February 18, 2018. Later he scored 31 points, including 24 in the second half, and shot 18-of-18 from the free-throw line in a Wisconsin Interscholastic Athletic Association Division I State Championship win against Brookfield East High School, his program’s first state title. Haliburton was named Oshkosh Northwestern All-Area Player of the Year, Wisconsin Gatorade Player of the Year, and FVA co-Player of the Year. He was also picked to the WBCA Division I All-State team and the USA Today All-USA Wisconsin first team.

Haliburton made his college breakout for Iowa State, recording 12 points, 4 rebounds, and 4 assists in a 79-53 victory against Alabama State on November 6, 2018. Later, on November 26, he scored a season-high 16 points in an 82-55 win over Omaha. He then recorded 15 points and 17 assists, on December 9, with one turnover, in a 101-65 victory against Southern. Tyrese’s 17 assists were the most by an Iowa State player in any game, surpassing the previous record set by Eric Heft in 1974. In his freshman season, Haliburton averaged 6.8 points, 3.6 assists, and 1.5 steals per game. Other than Zion Williamson, Tyrese was the only NCAA Division I true freshman to record at least 50 steals and 30 blocks. He had an assist-to-turnover ratio of 4.5, leading the Big 12 Conference and ranked second in Division I.

Tyrese was named Big 12 Player of the Week, during his sophomore season on November 11, 2019. This was after he averaged 13.5 points and 13.0 assists in wins against Mississippi Valley State and Oregon State. He scored a season-high 25 points, to go with 9 rebounds ad 5 assists, in an 83-76 defeat by Michigan at the Battle 4 Atlantis on November 27. Later, he recorded 22 points, 12 rebounds, and 10 assists in an overtime defeat by TCU on January 4, 2020. This was the first triple-double by an Iowa State player since Monte Morris in 2016. Subsequently, he was named Big 12 Player of the Week for the second time.

Following fracturing his left wrist during a game over Kansas State on February 8, he was ruled out for the rest of the season. Haliburton averaged 15.2 points, 5.9 rebounds, 6.5 assists, and 2.5 steals per game as a sophomore. He was then named to the second-team All-Big 12. Following the season, he announced that he would join the 2020 NBA draft and forgo his remaining college basketball eligibility.

Joining the draft, Haliburton was considered a guaranteed lottery pick, with some experts having him going as early as second overall to the Golden State Warriors in mock drafts. He was picked with the 12th pick by the Sacramento Kings in the first round of the 2020 NBA draft held on November 18, 2020. The Sacramento Kings officially announced that they had signed him on November 27, 2020.

Haliburton made his NBA breakout on December 23, 2020, coming off from the bench in a 124-122 overtime victory against the Denver Nuggets with 12 points, 4 assists, 2 rebounds, and a block. Later on, on May 2, 2021, he suffered a left knee injury over the Dallas Mavericks. Despite an MRI revealing later no ligament damage and is expected to make a full recovery, it was revealed that Tyrese would miss the final seven games of the 2020-21 season for the Kings. He was named as a top 3 finalist for Rookie of the Year on May 20, 2021, and named to the NBA All-Rookie First team on June 17, 2021.

Tyrese played for the United States at the 2019 FIBA Under-19 World Cup in Heraklion, Greece. He scored a team-high 21 points, shooting 8-of-9 from the field in a 102-84 group stage victory against Lithuania on June 30. Averaging 7.9 points and 6.9 assists per game, and shooting 69 percent from the field, Haliburton led the U.S. to a gold medal and was named to the all-tournament team.

American professional basketball player Haliburton is a point guard and shooting guard for Indiana Pacers. He was exchanged to the Pacers and signed a contract of $5,808,435 for the 2023-24 season. Haliburton has been playing professionally in the NBA from 2020 to the present. He has earned an accumulative net worth of $1 million- $5 million as of 2022.