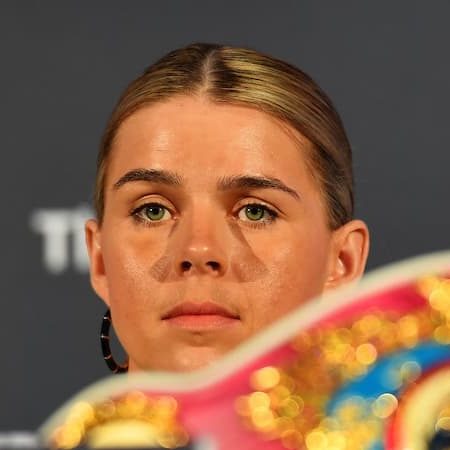 This article will answer every question you have about Savannah Marshall. Below are some of the frequently asked questions about her.

Who is Savannah Marshall?

Savannah Rose Marshall is a professional British boxer who held the WBO female middleweight title between 2020 and 2022. She became the first British female world champion as an amateur after securing gold at the 2012 World Championships. Because of her shyness and her multiple knockout wins, she has been nicknamed the ‘Silent Assassin’.As of October 2022, she is ranked as the second-best active middleweight woman in the world by BoxRec and The Ring.

How Old Is Savannah Marshall?

She is 31 years old as of October 2022, having been born on May 19, 1991, in Hartlepool, County Durham, England. Savannah shares her birthdate with celebrities such as; JoJo Siwa, Sam Smith, Marshmello, Nikocado Avocado, Jack Skye, and many more.

Who are Savannah Marshall’s Parents?

She was born to Donny Marshall (Father) and Kelly Landino (Mother).

Does Savannah Marshall have Siblings?

She received her high school education at The English Martyrs School and Sixth Form College where she received 12 GCSEs. After high school, she attended Hartlepool College of Further Education where she gained a Distinction in a BTEC National Diploma in Sport.

According to news on the internet, it shows that she is dating Hughie Fury (born on September 18, 1994) a British professional boxer.

Following her win in Qinhuangdao, China, at the 2012 AIBA Women’s World Boxing Championships, she was a favorite to win gold at the 2012 London Olympics. However, in her opening quarter-final bout, she was defeated 16-12 by Marinna Volnova of Kazakhstan with many feeling the occasion and expectation was too much for her to handle at the time. Moreover, she is the only boxer to have defeated Claressa Shields, the middleweight women’s gold medalist in the 2012 Olympics. The fight took place in the second round of the 2012 AIBA Women’s World Boxing Championships in Qinhuangdao. She beat Ariane Fortin of Canada at the 2014 Commonwealth Games in Glasgow to take the gold medal in the women’s middleweight division. In May 2016, after reaching the semi-finals of the 2016 AIBA Women’s World Boxing Championships in Kazakhstan, she qualified for the 2016 Rio Olympics.

In 2016, she stated that she went through “a dark time”. When she lost after a controversial decision at the Rio Olympics. But Floyd Mayweather had noticed her obvious talent and was quick to sign her as a pro. During a press conference to promote the IBF junior-lightweight title defense Mayweather promoted Gervonta Davis on May 18, 2017, against former British champion Liam Walsh.

Also, Floyd Mayweather Jr. announced to the press that he had signed Savannah to a professional promotional contract. Savannah went on to make her professional boxing debut at super-middleweight on the undercard of The Money Fight. In the professional boxing super-fight between undefeated five-division champion Floyd Mayweather Jr. and the former UFC Lightweight Champion and Featherweight Champion Conor McGregor. The fight took place on August 26, 2017, at the T-Mobile Arena in Paradise, Nevada. In the fight, she defeated Sydney LeBlanc by unanimous decision 40-36 in a four-round bout.

After winning all 10 rounds, she lifted the vacant WBA super-middleweight Inter-continental title in Sofia, Bulgaria to claim a comfortable points victory over Yanina Orozco (Argentina). A couple of weeks after her pro debut in Las Vegas, she decided to split from Mayweather Promotions, however, she said that she had left on good terms. Upon her return to the UK, she linked up with Hennessey Sport and went back to training with Peter Fury, the uncle of Tyson Fury. In her 9th professional fight on October 31, 2020, she became the WBO female middleweight champion with a TKO victory over opponent Hannah Rankin at Wembley Arena.

On September 10, 2022, she was initially scheduled to face Claressa Shields in a title unification bout. However, due to the death of Queen Elizabeth II, the fight was postponed to take place on October 15, 2022. However, Shields won the fight via unanimous decision with two judges scoring the fight 97-93 and one scoring it 96-94 all in favor of Sgileds to become the undisputed middleweight world champion.

Savannah Marshall’s Salary and Net Worth