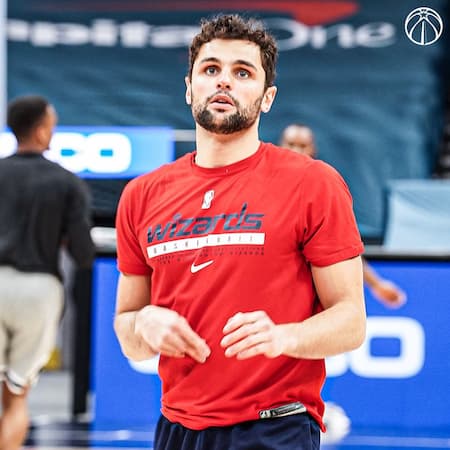 This article will answer every question you have about Raul Neto. Below are some of the frequently asked questions about him.

Who is Raul Neto?

Raul “Raulzinho” Togni Neto is a professional Brazilian basketball player for the Cleveland Cavaliers of the NBA (National Basketball Association). Moreover, he is a member of the senior men’s Brazilian national basketball team.

How Old Is Raul Neto?

He is 30 years old as of November 2022, having been born on May 19, 1992, in Belo Horizonte, Brazil. Raul shares his birthdate with celebrities such as; JoJo Siwa, Sam Smith, Marshmello, Nikocado Avocado, Nick DiGiovanni, and many more.

Who are Raul Neto’s Parents?

He was born to Raul Togni Filho (Father) a former Brazilian basketball player, and Claudia (Mother).

Does Raul Neto have Siblings?

He is married to the love of his life Jane Togni.

He was drafted with the 47th pick in the 2013 NBA draft by the Atlanta Hawks and he was immediately traded to the Utah Jazz.

In 2008, he made his professional debut with the Minas Tenis Clube during the 2008-09 FIBA Americas League. He then played a further three seasons for Minas and even represented the World Team at the 2010 Nike Hoop Summit.

After averaging 12.6 points and 2.2 assists per game as a sixth man for Minas in 2010-11, he signed with Laguna Aro GBC of Spain for the 2011-12 season. During the 2012-13 season, after averaging 8.5 points and 2.9 assists per game with Laguna Aro GBCM he was selected by the Atlanta Hawks as the 47th overall pick in the 2013 NBA draft. Later, he was traded to the Utah Jazz on draft night. However, he did not join the Jazz and instead returned to Lagun Aro GBC for the 2013-14 season.

He signed a three-year deal with UCAM Murcia on August 1, 2014. But he parted ways with the club following the 2014-15 season in order to sign in the NBA.

That same year on February 19, he scored a season-high 25 points in a 111-93 win over the Boston Celtics. But he spent a day with the Salt Lake City Stars, Utah’s D-League affiliate on January 9, 2017. And he was reassigned to Salt Lake City on January 11, 2017, and recalled the next day. During the playoffs, he played 9 of 11 matches. He was waived by the Jazz on July 2, 2019, due to the Mike Conley trade with the Grizzlies.

A Career with the Cleveland Cavaliers (2022 to Present)

He gained attention after leading the Brazil under-18 team to an impressive runner-up showing at the 2010 FIBA Americas Under -18 Championship. He followed this by being the youngest member of the senior Brazil national basketball team during the 2010 FIBA Worl Championship. Later, he participated in the 2012 Summer Olympics, the 2013 FIBA AmeriCup, and the 2015 FIBA Basketball World Cup for the senior team. He then had a strong performance against Argentina in the round of 16 during the World Cup, where he scored 21 points to lead Brazil to a win. Moreover, he played at the 2016 Summer Olympics.

Raul Neto Salary and Net Worth