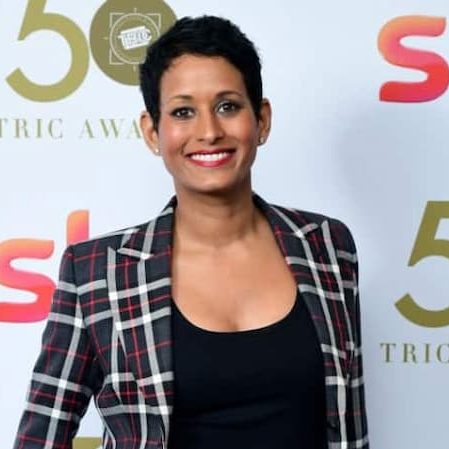 This article will answer every question you have about Naga Munchetty. Below are some of the frequently asked questions about her.

Who is Naga Munchetty?

How Old Is Naga Munchetty?

She is 47 years old as of October 2022, having been born on February 25, 1975, in Streatham, London, England. Naga shares her birthdate with celebrities such as; Noah Jupe, Case Walker, Jakob Greer, James Phelps, Jake Tuonto, and many more.

Who are Naga Munchetty Parents?

She was born to Muthu Chendriah (Mother). However, her father’s name is not mentioned on the internet. Her mother is Indian whereas her father is Mauritanian.

Does Naga Munchetty have Siblings?

She has a younger sister by the name of Mimi.

She received her high school education at Graveney School. After high school, she attended The University of Leeds, where she studied English Literature and Language and graduated in 1997.

She is married to the love of her life, James Haggar. They married in 2007, in Uckfield, Sussex.

Her television career began as a reporter for Reuters Finacial Television. After which, she worked as a senior producer for CNBC Europe, a business producer and reporter for Channel 4 News, and a presenter on Bloomberg Television. In October 2008, she joined Working Lunch after the show was revamped and stayed with the program until it was canceled in July 2010.

Moreover, she has hosted Radio 4’s Money Box. Also, she reports from the City for BBC News, gauging the reaction to breaking financial stories such as the Budget and the Pre-Budget Report. Since August 2010, she has presented early morning bulletins (UKT) on the BBC News Channel and BBC World News And is also a regular presenter on BBC One’s Breakfast. Moreover, she became the presenter on the 10 am to 1 pm Radio 5 program on Mondays to Wednesdays from January 2021 replacing Emma Barnett, who moved to Radio 4’s Woman’s Hour.

She co-hosted with Sally Taylor, The Spending Review – The South Today Debate on BBC One in September 2010. On October 30-31, 2010, she presented Paranormal Investigation to celebrate Halloween. Furthermore, she narrated the BBC documentary Fear and Faith in Paris looking at anti-Semitic attacks in Paris and their impact on the Jewish community of France. On January 2, 2013, she won Celebrity Mastermind. In June 2016, she replaced Sian Williams as presenter of Sunday Morning Live on BBC One. The next year, she was replaced by Emma Barnett and Sean Fletcher.

On August 26, 2016, she presented an episode of Newsnight on BBC Two. She was a contestant on the 14th series of Strictly Come Dancing having been paired with Pasha Kovalev. However, they were voted out in week four (Sunday, October 16, 2016). In October 2017, she co-presented Britain’s Classroom heroes with Sean Fletcher. That same year, she joined the cast of the CBBC sketch show Class Dismissed playing a fictionalized version of herself as a Media Studies teacher who acts like a newsreader.

Naga Munchetty Salary and Net Worth