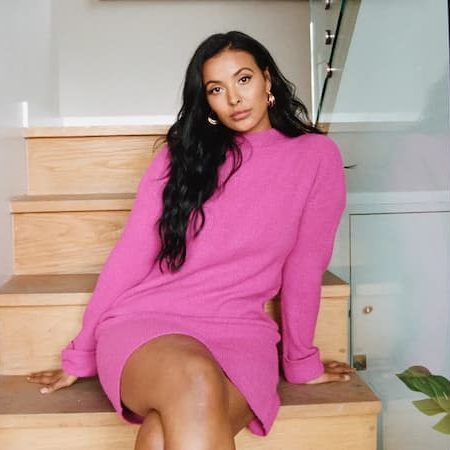 This article will answer every question you have about Maya Jama. Below are some of the frequently asked questions about her.

Who is Maya Jama?

Maya Indea Jama is an English prominent television, radio presenter, and DJ. She has co-presented BBC One’s Peter Crouch: Save Our Summer alongside Peter Crouch and Alex Home. She is also a presenter of the BBC Three competition Glow Up: Britain’s Next Make-Up Star from the third series (2021) onwards.

How Old Is Maya Jama?

She is 28 years old as of October 2022, having been born on August 14, 1994, in Bristol, England. Maya shares her birthdate with celebrities such as; Bryce Hall, Mila Kunis, Jack Manifold, Halle Berry, Marsai Martin, and many more.

Who are Maya Jama’s Parents?

She was born to Sadie (Mother). Her mother is of Swedish descent whereas his father is of Somali descent. However, his father’s name is not mentioned on the internet.

Does Maya Jama have Siblings?

She has a brother by the name of Omar.

She received her education at Cotham School.

She moved to London in 2012, to pursue a media career. First as an actress, then as a TV presenter and fashion model. Acting had been her first ambition but she realized that becoming a presenter might suit her better. Her early role models included Davina McCall and June Sarpong. As a teenager, she began her presenting debut, presenting the weekly music video countdown on JumpOff. TV and later worked for Sky UK on TRACE Sports.

In 2014, she hosted Maya’s FIFA World Cup cities for Copa90, a travel diary covering the 2014 FIFA World Cup in Brazil. That same year in August, she joined MTV as a presenter for The Wrap Up. In February 2017, she closely worked with Brit Awards hosting their 2017 Pre-Brit Awards Party and hosting a Facebook live stream from the red carpet. In September 2017, she co-presented with Andrew Flintoff, Frankie Bridge, Radzi Chinyanganya, and Ryan Hand, on the Saturday night game show, Cannonball on ITV.

She was a guest speaker on ITV’s Loose Women in September 2017 and February 2018. In November 2017, she became the youngest person (then 23) to co-host the MOBO Awards on Channel 5 with fellow presenter Marvin Humes. She went on to co-present the first series of The Circle on Channel 4 with Alice Levine in September 2018. That same year in October, she co-presented Stand Up to Cancer with long-standers Alan Carr and Adam Hills. Moreover, she went on to become the team captain on the ITV2 rap panel show Don’t Hate the Playaz presented by Jordan Stephens.

In 2019 and 2020, she appeared on Channel 4’s The Big Fat Quiz of the Year. In early June 2020, she presented the Saturday evening BBC One TV program Peter Crouch: Save Our Summer. The BBC announced in June 2021, that Maya would be the new presenter of Glow Up: Britain’s Next Make-Up Star. There, she replaced former presenter Stacey Dooley who presented the first two series of the program. It was announced in September 2021, that she would be the host of Simon Cowell’s new music competition gameshow Walk The Line.

Between 2014 and 2017, she hosted #DriveWithMaya, a weekend show on Rinse FM. In 2018, she joined BBC Radio 1, as she presented Radio 1’s Greatest Hits on Saturdays and co-presenting every Friday with Chris Stark and Scott Mills. From 2018 to 2020 she presented her program, Maya Jama, on Fridays and Saturdays on BBC Radio 1. The BBC confirmed in a statement on May 15, 2020m that Maya had left radio after two years. Her final show was already broadcast on May 3, 2020.

In addition to her television and radio work, she has also hosted, When Life Gives You Melons in 2018. This is a podcast available to streaming platforms in partnership with Freya Lingerie. The podcast featured Maya interviewing all-female guests about work, life, and relationships. And guests included Cherry Healey, Vick Hope, Anna Richardson, Vanessa White, Katie Piper, Gemma Cairney, and Laura Whitmore.

In 2018 also, she became an ambassador for Savera UK which operates in the United Kingdom to provide services to individuals from black ethnic minority communities who are at risk of domestic abuse. That same year in June, she launched a successful clothing collection with PrettyLittleThing, followed by a second collection in February 2019. In 2019, she donated blood for an NHS campaign and was found to have the rare and in-demand Ro blood subtype. The next year in December, she launched her own face eye mask range, MIJ Masks with the first release selling out within 24 hours.

Maya Jama’s Salary and Net Worth

Her salary is not mentioned on the internet but has an estimated net worth of £1.5million.