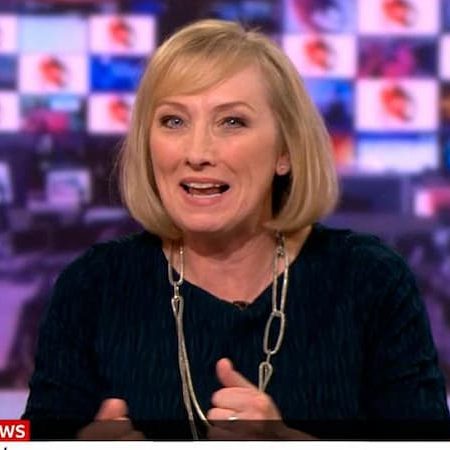 This article will answer every question you have about Martine Croxall. Below are some of the frequently asked questions about her.

Who is Martine Croxall?

Martine Sarah Croxall is a British well-known television journalist. She is one of the main news presenters on BBC News.

How Old Is Martine Croxall?

She is 53 years old as of October 2022, having been born on February 23, 1969, in Hinckley, Leicestershire, England. Martine shares her birthdate with celebrities such as; Desiree Montoya, Azzyland, Zadie Hope Zamolo, DJ Panton,Nyema, and many more.

Who are Martine Croxall Parents?

Does Martine Croxall have Siblings?

News on the internet shows that she has a sister. As she tweeted on August 1, 2017, “My sister and I are already thinking about when we can do that – just need to sit at the cemetery and take it in”.

She received her high school education at Bablake School. After high school, she attended The University of Leeds where she studied Geography and gained her BA in 1990.

She is married to the love of her life Stephen Morris. They married in 2000.

She and her husband Stephen have two kids. However, her kids’ names and whereabouts are not mentioned on the internet.

In 1991, she began her work experience with the BBC at BBC Radio Leicester. She followed this by working at East Midlands Today, the BBC program for the region. Also, she has worked at Newsroom South East (1997) and UK Today. Moreover, she is a regular news presenter on BBC News between 18:30 and midnight, alternate Thursdays, Friday-Sunday. Occasionally, she hosts Afternoon Live on BBC News and has presented on both BBC World News and World News Today.

In May 2022, she won an episode of Celebrity Mastermind, her specialist subject was American investigative journalist Nellie Bly. However, on October 24, 2022, she was taken off the air and investigated for impartiality after an incident on-air the previous evening that drew complaints she had displayed personal bias. Following the news that Boris Johnson was withdrawing from contesting for Conservative Party leadership, Martine declares that it was “all very exciting” and that she was “gleeful”. But it was unclear to viewers whether she was “gleeful” about Johnson’s withdrawal or the “fast-moving news agenda”.

Martine Croxall Salary and Net Worth