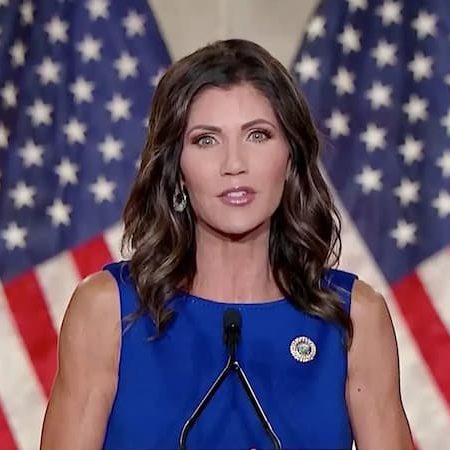 This article will answer every question you have about Kristi Noem. Below are some of the frequently asked questions about her.

Who is Kristi Noem?

How Old Is Kristi Noem?

She is 51 years old as of November 2022, having been born on November 30, 1971, in Watertown, South Dakota, U.S. Kristi shares her birthdate with celebrities such as; Jorge Garay, Emily Skinner, Mychaelade, Ian Hecox, and many more.

Who are Kristi Noem’s Parents?

She was born to Ron Arnold (Father) and Corrine Arnold (Mother).

Does Kristi Noem have Siblings?

She has two sisters by name of Kassidy and Cindy.

She is married to the love of her life Bryon Noem. They married in 1992, in Watertown, South Dakota.

A Career at the South Dakota House of Representatives

She won a seat as a Republican in the South Dakota House of Representatives in 2006. There, she represented the 6th district (comprising parts of Beadle, Clark, Codington, Hamlin, and Kingsbury counties). That same year, she won with 39% of the vote whereas in 2008 she was reelected with 41%. She served in the position for four years from 2007 to 2010 and was an assistant majority leader during her second term. Moreover, in her tenure, she was the prime sponsor of 11 bills that became law, including several property tax reforms and two bills to increase gun rights in South Dakota. In 2009, she served as vice chair of the Agriculture Land Assessment Advisory Task Force.

She ran for South Dakota’s at-large seat in the U.S. House of Representatives in 2010. She then won the Republican primary with a plurality of 42% of the vote against South Dakota Secretary of State Chris Nelson and State Representative Blake Curd. Then her primary opponents endorsed her in the general election. Her opponent in the general election was incumbent Democratic U.S. Congresswoman Stephanie Herseth Sandlin. During the 2010 election cycle, she outraised Herseth Sandlin, by $2.4 million to $2.1 million. And went on to defeat Herseth Sandlin, 48 % to 46%.

A Career in the 2012 Elections

Kristi went on to be reelected to a second term, This time around defeating Democrat Matthew Varilek, 57-43%.

A Career in the 2014 Elections

For a third term, she was reelected and defeated Democrat Corinna Robinson, 67-33%.

A Career in the 2016 Elections

Kristi was then reelected for a fourth term, defeating Democrat Paula Hawks, 64-36%.

Kristi was elected to the House Republican leadership in the 2011 House Republican 87-member freshman class, thus making her the second woman member of the House GOP leadership. After being elected to congress, she continued her education through online courses. She announced on March 8, 2011, the formation of a leadership political action committee, KRISTI PAC. In the first quarter of 2011, she was among the top freshman Republicans in PAC fundraising, raising $169,000 from PACs.

She has said that the U.S. needs an “all-of-the-above energy approach” that includes renewable like wind and ethanol while still realizing the need for a “balanced energy mix”. Moreover, she supported the Keystone XL Pipeline and supports offshore oil drilling. In 2011, she sponsored a measure to block Environmental Protection Agency funding for tighter air pollution standards for coarse particulates.

Kristi served on the House Armed Services Committee from 2013 to 2015 where she worked on the 2014 National Defense Authorization Act. In March 2011, she was critical of President Obama’s approach to the NATO-led military intervention in the 2011 Libyan civil war. This was to call on him to provide more information about the U.S.’s role in the conflict and characterize his statements as vague and ambiguous.

In 2017, she was on the conference committee that negotiated the passage of the Tax Cuts and Jobs Act, which she touted as giving the average South Dakota family a $1,200 tax cut. The following year, she was reported to have “pitched the idea of members of the conservative House Freedom Caucus to attach her online sales tax bill to the government funding package as part of an omnibus. Also, she called the budget deficit one of the most important issues facing Congress. In 2011, she indicated that she would vote to raise the federal debt ceiling, but only if “tied to budget reforms that change the way we spend our dollars and how Washington, D.C. does business.

A Career as Governor of South Dakota

She announced on November 14, 2016, that she would run for governor of South Dakota in 2018 rather than seek reelection to Congress. In the June 5 Re[ulbican primary, she defeated South Dakota Attorney General Marty Jackley, 56 to 44%. And in the general election, she defeated the Democratic nominee, 51.0 to 47.6%.

A Career in the 2022 Elections

On January 5, 2019, Kristi was sworn in as governor of South Dakota. Thus becoming the first woman in that office in the state.

She is anti-abortion. And thus has supported the anti-abortion group Susan B. Anthony List and has said that she intends to maintain her 100% anti-abortion voting record. She then went on to sign several bills restricting abortion, saying that the bills would “crackdown on abortion providers in South Dakota”. Also, she said “A strong and growing body of medical research provides evidence that unborn babies can feel, think, and recognize sounds in the womb. These are people, they must be given the same basic dignities as anyone else”. Following the overturning of Roe v. Wade, South Dakota went on and became one of the first states to enact trigger laws banning abortions.

In response to protests against the Keystone Pipeline, Kristi’s office collaborated with the energy company TransCanada to develop anti-protest legislation signed into law in March 2019 by Kristi. The law created a fund to cover the costs of policing pipeline protests. Another law was also passed to raise revenue for the fund by creating civil penalties for advising, directing, or encouraging participation in rioting.

This was to come before the committee to discuss the appraisal program in light of the controversy surrounding the program, Kristi, Kristi’s daughter, and a $280,000 payout for age discrimination. That same year on December 14, Brean testified before the Government Operations and Adult Committee. She said that Peter received an Agreed Disposition around March/April 2020. Republican State Representative John Mills introduced House Resolution 7004 on February 24, 2022. “Addressing the Governor’s unacceptable actions in matters related to the appraiser certification program” against Kristi.

During the COVID-19 pandemic in South Dakota, Kristi at first was responsive to containment strategies. As much as President Donald Trump began to actively resist governmental interventions, Kristi segued to a hands-off approach. She then used the pandemic relief funds in November 2020 to promote tourism during a surge in cases in the state. Also, she did not implement face mask mandates, raised doubts about the efficacy of mask-wearing, encouraged large gatherings without social distancing or mask-wearing, and questioned the advice of public health experts.

Thus she was one of few governors who had not maintained statewide stay-at-home orders as of December 2020. However, to the contrary, on March 13, 2020, she ordered K-12 schools to close and on April 6, she extended that order for the remainder of the school year. On April 6 also, she ordered businesses and local governments to practice social distancing and other CDC guidelines. At the time, one of the largest COVID-19 outbreaks occurred in South Dakota. And The Smithfield Foods production plant in Sioux FDalls had four deaths with nearly 1,300 workers and their family members testing positive.

She announced in February 2020, her opposition to a bill prohibiting schools and universities from requiring students to get vaccinated. The following year in May, she signed an executive order prohibiting government facilities from requiring proof of vaccination to access services, a policy she called “un-American”. In February 2021, she signed a bill limiting civil liability for certain exposures to COVID-19. The bill exempts healthcare providers and other businesses from lawsuits unless COVID-19 exposure was the result of gross negligence, recklessness, or willful misconduct.

Kristi signed a bill into law abolishing South Dakota’s permit requirement to carry a concealed handgun in 2019. In 2022, she sought to build a gun range in Meade County with government funds, but the legislature rejected it.

She opposes same-sex marriage. And she said in 2015, that she disagreed with Obergefell v. Hodges, the Supreme Court’s ruling that same-sex marriage bans are unconstitutional. She then announced on Twitter on March 8, that she would sign into law H.B. 2171, the Women’s Fairness in Sports Bill, which bans transgender athletes from playing on or against women’s school and college sports teams. However, South Dakota rejected Kristi’s style and formed a veto, 67-2 on March 29. She and her office signaled their support for an anti-trans bill called “An Act to protect fairness in women’s sports in December 2021. That same year, she signed a religious bill into law.

In 2020, she opposed two ballot measures to legalize cannabis for medical and recreational use in South Dakota. Saying ” The fact is, I’ve never met someone who got smarter from smoking pot. It’s not good for our kids. And it’s not going to improve our communities”. Also, she has opposed the cultivation of industrial hemp, vetoing a bill that passed the South Dakota House and Senate in 2019 to legalize hemp cultivation.

Kristi claimed that the 2020 presidential election was marred by widespread voter fraud, in which Joe Biden defeated Donald Trump; no evidence supports this claim. On December 8, 2020, she tacitly acknowledged the election’s outcome when she referred to a “Biden administration” during her annual state budget address. However, she still refused to accept that the election was “free and fair”. On January 6, 2021m after the U.S. Capitol was attacked by a pro-Trump mob, Kristi spoke out against the violence saying, “We are all entitled to peacefully protest. Violence is not a part of that”.

She said in February 2019, that the Trump administration’s trade wars with China and the European Union had devastated South Dakota’s economy, particularly the agricultural sector “by far” the state’s largest industry.

Kristi Noem’s Salary and Net Worth