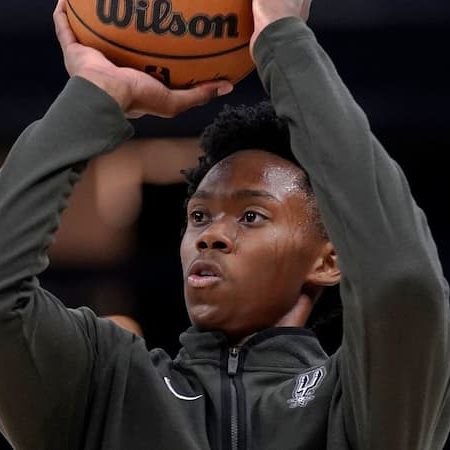 This article will answer every question you have about Joshua Primo. Below are some of the frequently asked questions about him.

Who is Joshua Primo?

Joshua Lincoln Alexander Primo is a professional Canadian basketball player who last played for the San Antonio Spurs of the NBA (National Basketball Association). While at college, he played college basketball for the Alabama Crimson Tide.

How Old Is Joshua Primo?

He is 19 years old as of November 2022, having been born on December 24, 2002, in Toronto, Ontario, Canada. Joshua shares his birthdate with celebrities such as; Mads Lewis, Louis Tomlinson, Diego Martir, Tiana Wilson, Alabama Barker, and many more.

Who are Joshua Primo’s Parents?

He was born to Michael Primo (Father) and Sandra Eileen Primo (Mother).

Does Joshua Primo have Siblings?

He has two siblings, a brother by the name of Michael and a sister by name of Keshia.

He received his high school education at Huntington Prep School but transferred to Royal Crown Academic School. After high school, he attended the University of Alabama.

News on the internet shows that he is in a relationship with Sophia Coppel.

He played high school basketball for Huntington Prep School where he was teammates with JT Thor. But he transferred to Royal Crown Academic School. And reclassified to the 2020 class and graduated early. Being considered a five-star recruit by 247Sports, he committed to playing college basketball for Alabama, choosing the Crimson Tide over Creighton.

He was the youngest player in college basketball in his freshman season. He then averaged 8.1 points and 3.4 rebounds per game and was named to the Southeastern Conference (SEC) All-Freshman. However, due to a left medial collateral ligament sprain, he missed three games. He then declared for the NBA draft on April 21, 2021, while maintaining his college eligibility. However, he announced on June 30, that he would remain on the draft due to a strong performance at the NBA combine.

He was selected by the San Antonio Spurs with the 12th pick in the 2021 NBA draft. Later, he was included in the 2021 NBA Summer League roster of the Spurs. The San Antonio Spurs announced on August 11, 2021, that they had signed Joshua. He then made his NBA debut on October 21, 2021, coming-off from the bench in the final five minutes with three points in a 123-97 win over the Orlando Magic.

While he was regarded as the youngest player who attended college to play in the NBA. He received his first assignment on October 17, 2021, to Austin Spurs. During the 2021-22 season, he was the youngest player. However, on October 28, 2022, he was waived by the Spurs. It was revealed the next day that he allegedly exposed himself to several women. In a statement released by ESPN through Adrian Wojnarowski, he is seeking mental, health treatment due to a “previous trauma”. The team’s sports psychologist filed a lawsuit in November against Joshua and the team, alleging multiple incidents of indecent exposure.

In addition to playing basketball at the club level, he also has played at the international level. Thus, he represented Canada at the 2019 FIBA Under-19 Basketball World Cup in Greece. At the age of 16, he was the youngest player on the team and averaged 4.2 points per game.

Joshua Primo’s Salary and Net Worth