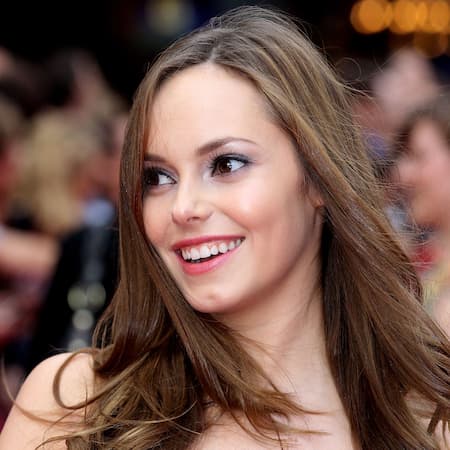 This article will answer every question you have about Hannah Tointon. Below are some of the frequently asked questions about her.

Who is Hannah Tointon?

Hannah Tointon is an English eminent actress. She is notably known for playing Katy Fox in the Channel 4 soap opera Hollyoaks and Tara Brown in the sitcom The Inbetweeners.

How Old Is Hannah Tointon?

She is 43 years old as of October 2022, having been born on December 28, 1987, in Southend-on-Sea, Essex, England. Hannah shares her birthdate with celebrities such as; Quackity, Nash Grier, Posie Rayne LaBrant, Stan Lee (1922-2018), Arianna Hailey, and many more.

Who are Hannah Tointon Parents?

She was born to Ken Tointon (Father) and Carol Tointon (Mother).

Does Hannah Tointon have Siblings?

She has an elder sister by the name of Kara Tointon (born on August 5, 1983) an English actress.

She received her education at St. Michael’s School, Leigh, and St. Hilda’s School.

She is engaged to her boyfriend, Joe Thomas (born on October 28, 1983) an English actor and comedian. They became engaged in 2017.

The couple announced in October 2022, the birth of their first child.

Her first appearance on television was in the CBBC hit sitcom Kerching! where she played Tamsin, the love interest of the main character Taj Lewis. In her next role, she played the character Billie in the series Star 2003. Following this, she went on to play Celina Johnson in the British police drama series The Bill. Moreover, she portrayed Casey in the horror film, The Children. In 2006, she played Bethany Williams in the television series Murder City in the episode “Just Seventeen”. Also, she appeared as Savannah Caskey in Dream Team. She appeared in New Tricks and had an uncredited part in the film Just My Luck as a concertgoer along with sister Kara. In early 2007, she appeared in Geenie in the House as Annabelle and also played Maxine Brogan in Doctors.

A Career at Hollyoaks

Hannah is prominently known for her appearance on the Channel 4 soap opera Hollyoaks. On April 30, 2007, she made her first appearance playing the sister of Warren Fox. Outside of Hollyoaks, she is close friends with Jamie Fox (Warren Fox), Chris Fountain (Justin Burton), Roxanne McKee (Louise Summers), and Kent Riley (Zak Ramsey). On November 3, 2007, it was announced that Hannah had to quit Hollyoaks to try new things. And thus she will have played the character of Katy Fox for a year.

A Career after Hollyoaks

She appeared in the role of an agoraphobic student named Emma Lewis in Doctors on November 11, 2008. This is a separate character from her previous Doctors stint. Also, she starred in The Children, a horror film that co-starred Jeremy Sheffield and was released in late 2008. In April 2010, she appeared in the Cornetto Enigma TV advertisement. It was announced in March 2012, that she would star in the forthcoming ITC2 supernatural drama Switch. That same year in July, she played a character called Frog in an episode of the E4 series The Midnight Beast where she was Dr’s girlfriend.

She also played Kuji in the Sinbad episode titled Kuji. In 2012 also, she played in The Hour the role of Kiki Delaine. Since 2014, she has appeared as Maud Gunnison in the British-American horror series Penny Dreadful. It was announced in September 2017, that she would be appearing in a new production of Strangers on a Train. Production was expected to tour from January 5 to March 31, 2018. It was announced in October 2019, that Hannah would take over the role of Dawn in the West End production of Waitress from December 2, 2019. In June 2022, she appeared as Rachel Saunders in the science fiction horror TV adaptation of The Midwich Cuckoos by John Wyndham. The series would broadcast on June 2, 2022, on Sky Max.

Hannah Tointon Salary and Net Worth

Her salary is not mentioned on the internet but has an estimated net worth of around $3 million.