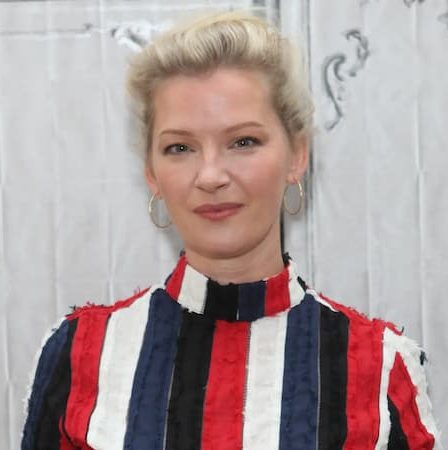 This article will answer every question you have about Gretchen Mol. Below are some of the frequently asked questions about her.

Who is Gretchen Mol?

How Old Is Gretchen Mol?

She is 49 years old as of September 2022, having been born on November 8, 1972, in Deep River, Connecticut, U.S. Gretchen shares her birthdate with celebrities such as; Naz Norris, DanTDM, Hannah Rylee, Gordon Ramsay, SZA, and many more.

Who are Gretchen Mol’s Parents?

She was born to Janet Mol (Mother) an artist and teacher. And her father is a teacher at RHAM High School. But her father’s name is not mentioned on the internet.

Does Gretchen Mol have Siblings?

She has a brother by the name of Jim Mol, a director, and editor in the film industry.

She received her high school education at Valley Regional High School. After high school, she attended The American Musical and Dramatic Academy.

She is married to the love of her life, Tod Williams (born on September 27, 1968) an American director, producer, and screenwriter. They married on June 1, 2004.

She began her acting career in summer stock theatre in Vermont where she played a variety of roles including Godspell and 110 in the Shade. In 2001, she played Jenny in Neil LaBute’s, The Shape of Things on stage in both London and New York. This is a role she reprised in the film version released in 2003. In 2004, she spent a year singing and dancing as Roxie Hart in the Broadway production of Chicago. Next, she played the role of Emily in the Broadway debut of Ayad Akhtar’s Pulitzer Prize-winning play, Disgraced in 2014-2015.

She has been in more than 30 feature films. In 1996, she made her film debut in Spike Lee’s film, Girl 6. After Girl 6, New York filmmaker Abel Ferrara took notice and cast Gretchen in two movies, The Funeral (1996) and New Rose Hotel (1998). In 1997, she had a small role in Donnie Brasco. Whereas the next year, she took a role opposite Jude Law in Music from Another Room, a romantic comedy. However, the film was virtually unnoticed by critics and audiences.

In 1998 also, she appeared in several notable films including Rounders starring Matt Damon and Woody Allen’s Celebrity opposite Leonardo DiCaprio. That same year, she came to prominence when she was featured on the cover of Vanity Fair. In 1999, for her second film with Woody Allen, she played a minor role in the film, Sweet and London. That year also, she played the female lead role in the film, The Thirteenth Floor. She went on to play in the 2003 film, Heavy Put-Away, where she played the victim of a con artist the film is based on the Terry Southern story.

Next, she starred as the lead in a romantic comedy, Puccini for Beginners in 2006, with her character having a lesbian affair. For two years, she worked with Mary Harron as the director struggled to finish The Notorious Bettie Page. The year 2007, was one of her busiest, with four films in production or in a release. This included a remake of 3:10 to Yuma starring Russel Crowe, and An American Affair, in which her character Catherine Caswell has an affair with John F. Kennedy.

In addition to her film work, she had her first television work was in a Coca-Cola commercial. In 1996, she had a small role as Maggie Tilton in the miniseries Dead Man’s Walk, based on the Larry McMurtry novel. Moreover, she was among the three lead actresses in David E. Kelley’s 2002 series girls club though it had ended after its second episode due to underwhelming ratings. She went on to appear in two TV remakes of classic films: Picnic (2000) in the role of Madge Owens and The Magnificent Ambersons as Lucy Morgan (2002). In January 2007, she made a Hallmark Hall of Fame television movie starring in The Valley of Light. This is a story set in post-World War II based on a novel by Terry Kay. This became her second Hallmark production.

In 1996, she had a minor role in Calm at Sunset. Next, she played Norah in The Memory Keeper’s Daughter which aired in the U.S. on The Lifetime Channel in April 2008. In the ABC series, Life on Mars, she played NYPD Officer Annie Norris. The series is the U.S. remake of the British show of the same name. On October 9, 2008, it started airing in the U.S. and ran 17 episodes concluding on April 1, 2009. Moreover, she had a recurring role on HBO’s Boardwalk Empire as Gillian Darmody. Gretchen shared two SAG Awards for Outstanding Performance by an Ensemble in a Drama Series with the cast in 2010 and 2011. In February 2018, she played attorney Sam Henessy in the Netflix series, Seven Seconds. Netflix confirmed on April 18, 2018, that the show would not have a second season, deeming it a limited series.

Gretchen Mol’s Salary and Net Worth