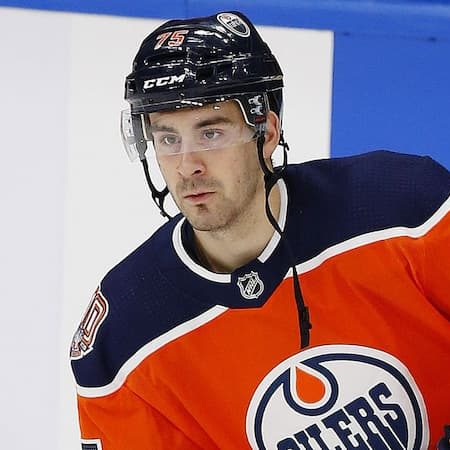 This article will answer every question you have about Evan Bouchard. Below are some of the frequently asked questions about him.

Who is Evan Bouchard?

Evan Bouchard is a professional Canadian ice hockey defenceman currently playing for the Edmonton Oilers of the NHL (National Hockey League). He was selected 10th overall in the 2018 NHL Entry Draft by the Oilers.

How Old Is Evan Bouchard?

He is 23 years old as of October 2022, having been born on October 20, 1999, in Oakville, Ontario, Canada. Evan shares his birthdate with celebrities such as; NBA YoungBoy, Snoop Dogg, Blesiv, Bryce Parker, Vallyk, and many more.

Who are Evan Bouchard’s Parents?

He was born to Gary Bouchard (Father) and Paula Bouchard (Mother).

Does Evan Bouchard have Siblings?

News on the internet shows that he has a brother by the name of Marc Bouchard.

He is currently in a relationship with his girlfriend, Sophie.

In the 2015 OHL Priority Selection, he was drafted in the first round, 17th overall by the London Knights. He then went on to help London to capture the OHL Championship and 2016 Memorial Cup in his first year with the organization. And was named captain of the Knights for the 2017-18 OHL season. At the conclusion of the year, he was named a finalist for the Max Kaminsky Trophy as Defenceman of the Year and the Red Tilson Trophy as MVP of the OHL.

He was selected by the Edmonton Oilers in the first round, 10th overall in the 2018 NHL Entry Draft. A few weeks later, the Oilers signed him to a three-year entry-level contract on July 17. He then became the youngest Oiler defenceman in history to record a goal when he scored in a 4-1 win over the Washington Capitals on October 25, 2018. This was after he had turned 19 five days before the game. However, he was returned to the Knights on November 2, after seven games with the Oilers. During the 2018-19 season, he only skated in 45 games for the Knights and he recorded 16 goals and 53 points. In addition, he added another 21 points in eleven postseason games.

On April 25, 2019, he was named the winner of the Max Kaminsky Trophy as the league’s top defenceman. However, due to the COVID-19 pandemic’s effect on the AHL, he spent part of the 2020-21 season with the Sodertalje SK of Sweden’s HockeyAllsvenskan. Then he joined the Oilers for the shortened season even though he had some difficulty getting ice time despite solid play. In 81 regular season games, he solidified his place on the roster, managing 12 goals and 31 assists in the 2021-22 season. This was after pairing alongside former Blackhawk defenseman Duncan Keith who also quarterbacking the team’s second power-play unit. The Oilers then qualified for the 2022 Stanley Cup playoffs but lost in the Final to the Colorado Avalanche.

In addition to playing hockey at the club level, he also has played hockey internationally. On December 3, he was loaned to Team Canada in order to compete for a roster spot on their 2019 World Junior Ice Hockey Championship team. He then was named an alternate captain for Team Canada on December 25, along with Jaret Anderson-Dolan and Ian Mitchell for the 2019 World Junior Ice Hockey Championships.

Evan Bouchard’s Salary and Net Worth