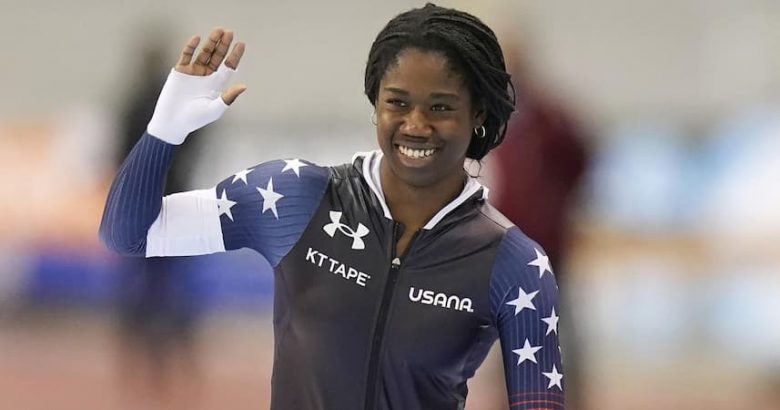 Who is Erin Jackson?

Erin Jackson is an American professional speedskating Olympic champion, inline skater, and roller derby player. Jackson qualified for The World Games 2017 in Wroclaw, Poland, where she finished in inline speed skating at various distances on the road and track. At the 2018 Winter Olympics in Pyeongchang, she qualified to complete the 500 meters long track speed skating event.

Jackson won her first 500 meters Speedskating World Cup races in Poland with a two-track record in November 2021. She became the first Black American woman to win in the World Cup. On February 13, 2022, she also won the gold medal in the Women’s 500m speed skating event at the 2022 Beijing Winter Olympics. Jackson is the first Black female athlete to medal in speed skating.

Jackson received gold in the 500-m inline skating race at the 2008-09 Junior World Championships, and gold in the same event at the 2014 Pan American Championships. She was named the United States Olympic Committee Female Athlete of the Year for Roller Sports in 2012 and 2013. Jackson competes in roller derby with the Jacksonville RollerGirls of the Women’s Flat Derby Association (WFTDA). She earned the MVP award at the 2014 WFTDA Division I Playoff in Evansville, Indiana, and advanced to WFTDA Championships in both 2015 and 2016.

Jackson began her transition to speed skating on the ice in 2016. With only four months of experience in speedskating on ice, she qualified for the 2018 Winter Olympics. She qualified at the 500-meter distance and completed 24th out of 31 competitors in Pyeongchang guided by coach Renee Hildebrand.

Jackson won the gold medal at the 2022 Winter Olympics in Beijing, China in the Women’s 500-meter speed skating event. She was racing in the 14th pairing (out of 15) and besting the field by 0.07 seconds with a time of 37.04 seconds. Jackson almost missed out on qualifying for the Olympics after slipping during the U.S. Trials in the event. Her longtime friend and teammate Brittany Bowe won the event, however, she gave up her spot for Jackson to qualify. Erin became the first black woman to win Olympic gold in a speed skating event.

How old is Erin Jackson?

Who are Erin Jackson’s parents?

Does Erin Jackson have siblings?

Jackson was born into a family of two children. She has one sibling, a brother Corey Farmer.

Jackson joined and studied at Shores Christian Academy, before joining Howard Middle School and then Forest High School. After graduating from high school, she attended the University of Florida, graduating with honors from the Materials Science & Engineering program.

Jackson grew interested in skating from a young age and first skated at the age of eight, trying figure skating. She went on to focus on her skating through high school and college and pursued a career in skating.

Jackson is presently single and unmarried, with no information about her relationships, now and the past. She seems very committed to her career and has not been engaged in any relationship.

Jackson has no children of her own to the present, as she has not been linked to any relationships.

Famous American professional speed skater, inline skater, and roller derby player, Jackson has been active in her career from 2008 to the present. She has won various medals throughout her career and has gathered an accumulative net worth of approximately $5 million as of 2022.