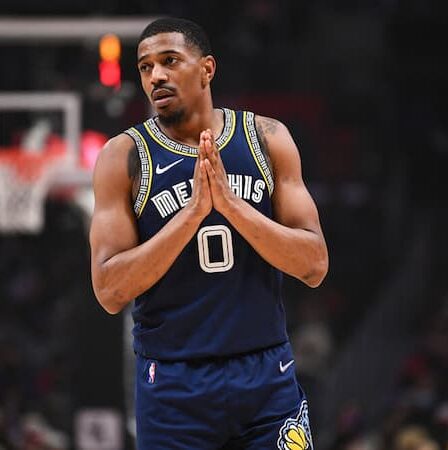 This article will answer every question you have about De’Anthony Melton. Below are some of the frequently asked questions about him.

Who is De’Anthony Melton?

De’Anthony Melton is a well-known as American professional basketball player for the Philadelphia 76ers of the National Basketball Association (NBA) nicknamed Mr. Do Something. He was selected by the Houston Rockets in the 2nd round of the 2018 NBA draft.  With the 46th pick but was traded to Phoenix before his rookie season began. He played college basketball for the USC Trojans of the Pac-12 Conference but did not play in the 2017–18 season. Due to the events relating to the 2017–18 NCAA Division I men’s basketball corruption scandal. In the 2019 offseason, he was traded to the Grizzlies. In the 2022 off-season, he was traded to the 76ers.

Melton became the 1st freshman to record at least 300 points, 150 rebounds, 100 assists, and 60 steals. And 35 blocks in their starting season since Dwyane Wade. As a result of those starts, he was projected to be a key player for USC’s upcoming season.

The prosecutors in New York revealed charges of fraud and corruption against 10 people involved in college basketball such as USC assistant coach Tony Bland. The charges allege that Tony and other members involved allegedly received benefits from financial advisers and others to influence student-athletes to retain their services. After the announcement, USC indefinitely suspended Meton in relation to the scandal because of a family member’s involvement there. He then revealed he would withdraw from USC and declare for the 2018 NBA draft on February 21, 2018.

Melton was selected with the 46th pick by the Houston Rockets in the 2018 NBA draft. He played for the Rockets during the 2018 NBA Summer League in Las Vegas. In 5 games, Melton recorded 16.4 points, 7.2 rebounds, 4.0 assists, and 3.0 steals per game. His best game within the event was on July 9 where he made 26 points, 10 rebounds, and 5 assists in a 104–90 win over the Los Angeles Clippers. Melton was traded alongside Ryan Anderson to the Phoenix Suns in exchange for Brandon Knight and Marquese Chriss on August 31. Melton signed his 1st NBA contract with the Suns on September 21.

He made his professional debut with the Suns on October 22, 2018, in a 123–103 loss to the Golden State Warriors, but did not record significant playing time until October 31 in a 120–90 loss to the San Antonio Spurs. Melton was assigned to the Northern Arizona Suns, Phoenix’s development team in the NBA G League, for their 1st game of the season on November 3, 2018. He played one game, a 118–108 loss to the Santa Cruz Warriors, and was recalled to Phoenix the next day.

How old is De’Anthony Melton?

Melton is currently aged 24 years old as of 2023, having been born on May 28, 1998, in North Hollywood, California, U.S. He shared his birthdate with popular people such as Colbie Caillat, Craig Kimbrel, Elisabeth Hasselbeck, Gladys Knight, Irwin Winkle, Jerry Douglas, Jerry West and many more·

Who are De’Anthony Melton’s Parents?

Melton was born and raised in North Hollywood, California, U.S. to his parents Monique Young and Anthony Melton.

Does De’Anthony Melton have Siblings?

He was born into a family of six children, he has five siblings but their names are not known in the media.

Melton graduated from Crespi HS in Encino, Calif. in 2016, after having led his team to back-to-back state titles and leaving as the school’s all-time leading scorer.

Melton is unmarried, he doesn’t seem to be dating anyone at the moment. Not much information about his past relationship and any previous engagements.

Melton is possibly single, he does not have any children of his own yet.

Melton recorded a professional high of 21 points in a 122–105 loss to the Sacramento Kings on December 4. He also recorded season-high 10 assists in a 102–93 win over the Denver Nuggets on January 12, 2019. Melton later suffered a right ankle sprain on January 24, leaving him out of action for close to a month before returning briefly for the NBA G League on February 20, and then played in the NBA proper three days later against the Atlanta Hawks. On March 16, Melton recorded a career-high 8 rebounds in a 138–136 overtime win over the New Orleans Pelicans.

Melton was 2nd in the NBA in rookie steals in 2018–19 with 1.36 SPG. When Melton is on the floor, he recorded steals more frequently than any other player in the NBA, ranking 1st with 3.3 steals per 100 possessions (min. 700 total minutes played). Among rookies to start in the majority of their appearances, Melton’s 3.3 steals per 100 possessions are tied for 6th most all-time in Basketball-Reference’s database.

The Suns traded Melton, Josh Jackson, and two second-round picks to the Memphis Grizzlies in exchange for Jevon Carter and Kyle Korver on July 7, 2019. The Memphis Grizzlies announced that they had signed Melton to a 4-year, $34.6 million contract on November 22, 2020.

Within the 2022 NBA draft, Memphis traded Melton to the Philadelphia 76ers for Danny Green and the draft rights to David Roddy.

Melton is an American professional basketball player for the Philadelphia 76ers of the National Basketball, he has not shared his net worth in the media.