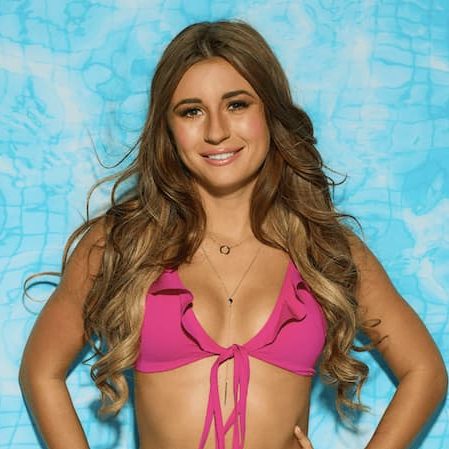 This article will answer every question you have about Dani Dyer. Below are some of the frequently asked questions about her.

Who is Dani Dyer?

Dani Charlotte Dyer is an English eminent television personality and actress. She appeared on Survival of the Fittest in 2018, and later that year she won the fourth series of Love Island alongside Jack Fincham. Since then, she went on to co-present the MTV series Truth Love or Truth Lies alongside her father Danny Dyer, as well as co-hosting a podcast called Sorted with the Dyers with him.

How Old Is Dani Dyer?

She is 26 years old as of November 2022, having been born on August 8, 1996, in Newham, London, England. Dyer shares her birthdate with celebrities such as; Shawn Mendes, Jentzen Ramirez, Corpse Husband, MightyDuck, Ryan Garcia, and many more.

Who are Dani Dyer’s Parents?

Does Dani Dyer have Siblings?

It was reported in October 2021, that she is in a relationship with Jarrod Bowen (born on December 20, 1996) an English professional footballer. Also, she has been in previous several relationships.

She has one kid with her ex-boyfriend Sammy Kimmence. A son by the name of Santiago (born on January 23, 2021).

She began her professional screen debut in 2006 as an extra in the film The Other Half alongside her father. Moreover, she has appeared as an extra in other films starring her father including; Doghouse (2009), Run for Your Wife (2012), and Vendetta (2013). The producer of the latter said that she “absolutely blew away” the crew. Then she independently appeared in films such as We Still Kill the Old Way (2014), Age of Kill (2015), and Bonded by Blood 2 (2017). She was announced in 2018 as a cast member for the ITV2 reality series Survival of the Fittest, however, she walked from the series on the second day because of dislocating her shoulder.

Later that year, she competed in the 4th series of ITV2’s Love Island. She went on to win the series with 79.66% of the final vote alongside Jack Fincham. Following their win, she and Fincham went on and starred in the three-part ITVBe reality series Jack & Dani: Life After Love Island. In 2019, she began appearing on The One Show as a guest reporter whereas in 2020m she launched a range of lip products with Vaseline. Later in 2020, she began co-hosting a podcast with her father titled Sorted with the Dyers. The next year in June, she made a guest appearance as a taxi driver named Jeanette in the BBC soap opera EastEnders and went on to appear alongside her father who portrays series regular Mick Carter.

Adding up to her well-curved and beautiful body, she stands at a height of 5ft 1inch (1.55m) and has unknown weight.

Dani Dyer’s Salary and Net Worth

News on the internet shows that she earns £750,000 per year and has an estimated net worth of around £1.7 million.