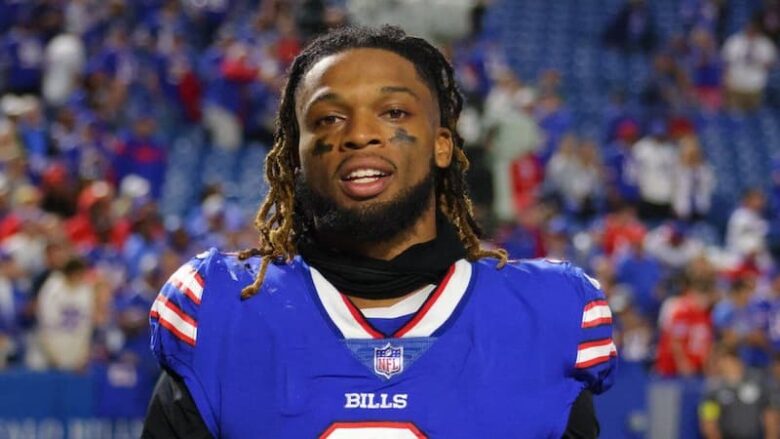 This article will answer every question you have about Damar Hamlin. Below are some of the frequently asked questions about him.

Who is Damar Hamlin?

Damar Romeyelle Hamlin is a professional American football safety for the Buffalo Bills of the NFL (National Football League). While at college, he played college football at Pittsburgh. During a game on January 2, 2023, against the Cincinnati Bengals, he collapsed on the field. This was after delivering a tackle. Thus CPR was administered to him before being rushed to the hospital.

How Old Is Damar Hamlin?

He is 24 years old as of January 2023, having been born on March 24, 1998, in McKees Rocks, Pennsylvania, U.S. Hamlin shares his birthdate with celebrities such as; Jack Johnson, Luke Nelson, The Undertaker, Amyah Bennett, Jim Parsons, and many more.

Who are Damar Hamlin’s Parents?

He was born to Mario Hamlin (Father) and Nina Hamlin (Mother).

Does Damar Hamlin have Siblings?

He received his high school education at Central Catholic High School where he was named first-team All-State and the Class AAAA Defensive Player of the Year. After high school, he attended The University of Pittsburgh.

Coming out of Catholic Central, he was considered a top cornerback and was recruited by multiple major college football programs. He thus enrolled at the University of Pittsburgh to play college football for the Pittsburgh Panthers. As a freshman, he played in three games before suffering an injury and redshirting. He thus recorded 41 tackles with one interception in nine games played as a redshirt freshman. As a redshirt sophomore, he led the Panthers with 76 tackles and two interceptions. And was named honorable mention All-Atlantic Coast Conference (ACC). As a redshirt junior, he had 84 tackles with ten passes broken up. Going into the final season, he was named a team captain and was named second-team All-ACC after leading the team with 66 tackles and seven passes were broken up.

He was selected by the Buffalo Bills in the sixth round overall pick of the 2021 NFL Draft. Thus on May 21, 2021, he signed his four-year rookie contract. After playing a reserve role in his rookie season, he went on to become one of the Bills’ starting safeties in 2022. This was after Micah Hyde suffered a season-ending neck injury in week 2.

During a week 17 game on January 2, 2023, against the Cincinnati Bengals Night Football, he collapsed after tackling wide receiver Tee Higgins. As he remained motionless, team trainers and paramedics rushed to his side within seconds. He was thus placed on a stretcher and an ambulance came onto the field as most of the players from both teams came off the sidelines to kneel or stand around Hamlin. CPR was thus initiated and administered defibrillation to Hamlin on the field for 10 minutes.

Moreover, he was given oxygen, intubated, and administered an intravenous solution (IV). At roughly 9:25 p.m. EST, he was transported to the University of Cincinnati Academic Health Carer and was reported to be in critical condition. The game was thus suspended in accordance with the NFL’s emergency-situation rules with 5:58 remaining in the first quarter. And was postponed shortly after 10 p.m., about one-half after Hamlin collapsed. Because of this incident, Higgins offered his condolences to Hamlin’s family as did Ja’Marr Chase and James Franklin. Basketball player LeBron James also voiced his support for the NFL’s decision to postpone the game.

Damar Hamlin’s Salary and Net Worth