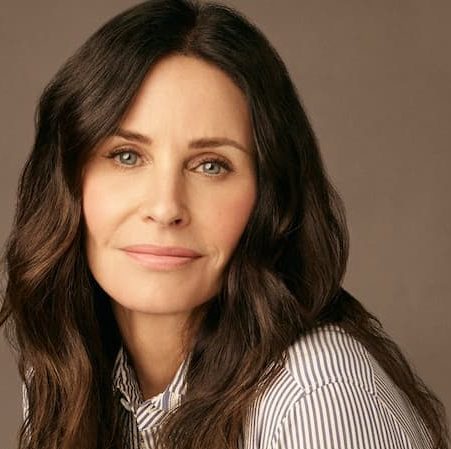 This article will answer every question you have about Courteney Cox. Below are some of the frequently asked questions about her.

Who Is Courteney Cox?

Courteney Bass Cox or Courteney Cox-Arquette is a famous American actress, director, and producer. She gained popularity for her starring role as Monica Geller on the NBC sitcom “Friends”, which aired from 1994 to 2004. Courteney received seven Screen Actors Guild Award nominations for her performance in the series and won one of the awards.

She received extended recognition for starring as Gale Weathers in the horror film Scream (1996-present). From 1987-1989, Cox starred as Lauren Miller in the NBC sitcom Family Ties. Lucy Spiller in the FX drama series “Dirt” (2007-2008), and as Jules Cobb in the ABC/TBS sitcom “Cougar Town” (2009-2015). The lattermost earned her nominations at the Golden Globe Awards and the Critics’ Choice Awards.
Her other films include the action fantasy Masters of the Universe (1987), the comedy Ace Ventura: Pet Detective (1994), the animated comedy Bedtime Stories (2008), and the independent drama Mothers and Daughters (2016). Courteney owns the production company Coquette Productions. She has also worked as a director on her sitcom “Cougar Town”, the television drama film “TalhotBlond (2012), and the black comedy-drama film “Just Before I Go” (2014).

How Old is Courteney Cox?

She is 57 years old as of February 2022, having been born on June 15, 1964, in Birmingham, Alabama, U.S. Cox shares her birthdate with celebrities such as North West, Sissy Sheridan, Ice Cube, Wolfie, and many more.

Who are Courtney Cox’s Parents?

She was born to Richard Lewis Cox (Father) a businessman, and Courteney Bass (Mother).

Does Courteney Cox have Siblings?

She received her high school education at Mountain Brook High School. Cox then left for Mount Vernon College in Washington, D.C. She did not finish her architecture course, she, therefore, opted to pursue a career in modeling and acting.

She was previously married to David Arquette. They married on June 12, 1999, but later divorced in May 2013. In late 2013, Cox began dating Snow Patrol band member Johnny McDaid. They engaged in June 2014 but later called off the engagement, but still remained a couple. Cox has also dated actor Michael Keaton from 1989 to 1995.

Cox together with her ex-husband David Arquette has a daughter who goes by the name of Coco Arquette born on June 13, 2004.

In the 1980s, Courteney worked at a video game publisher Bethesda Softworks. She was chosen from a casting ball to appear in the 1984 music video by director Brian De Palma for Bruce Springsteen’s “Dancing in the Dark”. Cox’s early television works include a starring role as Gloria Dinallo in the short-lived NBC science-fiction fantasy series”Misfits of Science” (1986), guest-starring roles in the ABC comedy-drama series “The Love Boat” (1986), and the CBS crime drama series “Murder, She Wrote” (1986). Courteney’s early films include Cocoon: The Return (1988), and I’ll Be Home for Christmas (1988). She then co-starred in the short-lived CBS sitcom The Trouble with Larry, alongside Perry King and Bronson Pinchot in 1993.

In 1994, Courteney was asked to audition for the starring role of Rachel Green on a new sitcom, “Friends”, instead she was cast as Monica Geller. Cox joined crew members of the series are Jennifer Aniston (Rachel Green), Lisa Kudrow (Phoebe Buffay), Matt LeBlanc (Joey Tribbiani), Matthew Perry (Chandler Bing), and David Schwimmer (Ross Geller). Her role in the film, made her famous as the film lasted for 10 seasons until 2004. According to the (2005) Guinness Book of World Records, Courteney, along with her female co-stars, became the highest-paid TV actress of all time. She gained further popularity for her starring role as reporter Gale Weathers in the horror film “Scream” (1996), and its sequels Scream 2 (1997) and Scream 3 (2000).

During this period of time, Cox’s major films include the crime drama 3000 Miles to Graceland (2001) and the comedy The Shrink Is In (2001). Courteney starred in the independent drama film November (2005). She also made a brief appearance in the big-budget remake The Longest Yard (2005) as Lena, the girlfriend of Paul Crewe (Adam Sandler). In the animated film Barynyard (2006), Cox voiced the role of Daisy. Entertainment Weekly announced in July 2018 that Courteney signed on to star in a three-episode arc for the television medical comedy series “Scrubs”.

Cox began her role as the star of the single-camera ABC comedy series “Cougar Town” in 2009. In the film, she played the role of a newly single 40-year-old mother on the hunt for new experiences. Her notable work in the film earned her a nomination for the Golden Globe Award for Best Actress-Television Series Musical or Comedy.

After six seasons, the series came to an end on March 31, 2015. In the sequel Scream 4, Cox reprised her role as Gale Weather for the Scream trilogy. On April 15, 2011, the film was released in theaters. Courteney executive produced syndicated game show Celebrity Name Game, from 2014-2017, hosted by Craig Ferguson. After 3 seasons, the series ended and earned her a nomination for the Daytime Emmy Award for Outstanding Game Show. In 2016, Courteney starred in the independent drama film “Mothers and Daughters”, alongside Mira Sorvino, Sharon Stone, and Susan Sarandon.

In 2019, Cox created and executive produced the Facebook Watch documentary series 9 Months With Courteney Cox. She guest-starred in the ABC sitcom Modern Family in 2020. On May 27, 2021, Cox reunited with her Friends co-stars for a re-union special entitled Friends: The Reunion. This made her earn a nomination for the Primetime Emmy Award for Outstanding Variety Special. Courteney resumed her role as Gale Weathers for the film Scream 5. On January 14, 2022, the film was released. Cox signed on to star alongside Greg Kinnear in the Starz upcoming horror-comedy series “Shining Vale”, from creators Jeff Astrof and Sharon Horgan.

Courteney Cox Salary and Net Worth

Cox is paid $1 million per episode in the film Friends. She has a net worth of $150 million.