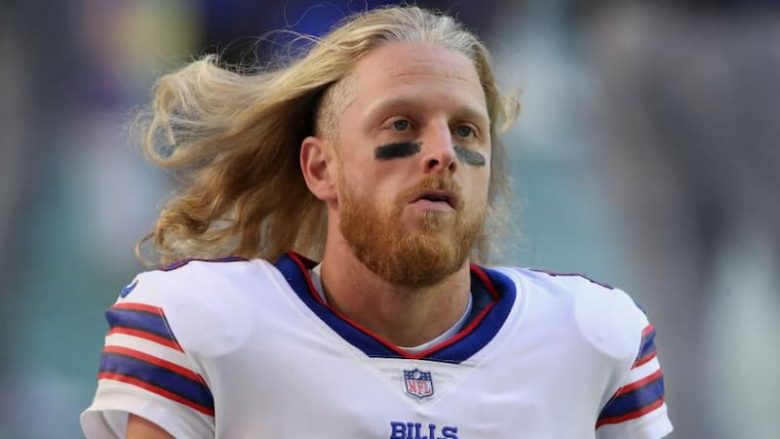 This article will answer every question you have aboutCole Beasley Below is some of the frequently asked questions about him.

Who is Cole Beasley?

Cole Beasley is well-known as an American football Wide receiver for the Tampa Bay Buccaneers of the National Football League (NFL). He played college football at Southern Methodies University and was signed by the Dallas Cowboys as an undrafted free agent in 2012.

He joined Little Elm High School, where he was an option quarterback, leading the Lobos to the Texas UIL-4A playoffs in consecutive years. Beasley was a district co-MVP, posting 1,184 rushing yards, 12 rushing touchdowns, 1,570 passing yards, and 12 touchdowns. He was rated as a 2-star recruit by Rivals.com.

Beasley accepted a scholarship from Southern Methodist University, where he was converted into a wide receiver, playing in 11 games with 7 starts as a freshman, while finishing third on the team with 42 receptions for 366 yards and three touchdowns. As a sophomore, Beasley started seven games, making 40 receptions fourth on the team for 493 yards and three touchdowns.

SMU would win the 2009 Hawaii Bowl marking their first bowl invitation since the so-called death penalty. As a junior, Beasley posted 87 receptions (second for a single season in school history), 1,060 yards, and six touchdowns. As a senior, Beasley registered 86 receptions for 1,040 yards (second on the team) and two touchdowns.

Beasley went undrafted in the 2012 NFL Draft due to his size and was signed by his home state team, the Dallas Cowboys. He then left abruptly during training camp, stating he was dealing with “personal stuff”, and even considered retiring from professional football. Beasley went on to have a sudden change of heart, returning and making the final 53-man roster. Beasley finished his rookie year with 15 receptions for 128 yards in ten games and no starts.

He found ways to be productive while being surrounded by a corps of Wide receivers, having the highest completion percentage of any receiver in the NFL with more than 10 targets. He was targeted by quarterback Tony Romo on third down, especially in spread formations. Much of this became attributed to Beasley’s very good route running. He finished his second professional season with 39 receptions for 368 yards and two touchdowns to go along with 79 return yards in 14 games and 3 starts.

How Old is Cole Beasley?

Beasley is 33 years old as of 2022, having been born in Dallas Texas. He shared his birthday with famous people such as Marcus Aurelius, David Hume, John James Audubon, Frederick Law Olmsted, Rudolf Hess, Eddie Eagan, I. M. Pei, Carol Burnett, and many more.

Who are Cole Beasley’s Parents?

Beasley was born to Mike Beasley and Danettle Beasley. His parents have supported their son’s career all through the years.

Does Cole Beasley have siblings?

Beasley has one younger brother named Shayne Beasley. His brother is married with a son.

He joined Little Elm High School, where he was an option quarterback. Then he went to Southern Methodist University. He was rated as a 2-star recruit by Rivals.

Beasley has been Engaged with Krystin Beasley since 28th July 2014. The couple has no rumor whatever of an affair outside their marriage.

Beasley has 3 children with his wife. The firstborn was born in 2014 and he is named Ace Beasley. They got their second son Everett, on 15 January 2018. Moreover, the pair again welcomed their third child, a daughter named, Joviie Carter Beasley who was born on 16th January 2019.

Beasley posted 37 receptions 4th on the team for 420 yards 4th on the team and 4 touchdowns in 16 games and two starts in 2014. He averaged nearly 50 yards per game during the fine 6 contests of the season. In the Wild Card round against the Detroit Lion, he made 4 catches- 3 for first downs- for 63 yards and recovered a fumble in the 220 victories.

The Cowboys signed him for an additional four years, with a total contract value of $13.6 million. With leading receiver Dez Bryant injured for most of the season, he finished with 52 receptions tied for second on the team for 537 yards and five touchdowns, and led the team while playing with four different starting quarterbacks with varying degrees of knowledge of the team’s offense on March 3.

At the beginning of the year, Beasley was used to filling in as a punt returner, due to his ball security ability. He was eventually replaced by rookie Lucky Whitehead after having poor return averages and a critical muffed punt in a loss against the New York Giants.

He Beasley posted career highs in receptions and yards, catching 75 passes for 833 yards and five touchdowns in 2016. His 76. rate ranked second among NFL wide receivers in 2016. In the Divisional Round round against the Green Bay Packers, Beasley made four catches for 45 yards and had eight return yards in the 34-31 loss.

He finished with 36 receptions for 314 yards and four touchdowns in the 2017 season.

Beasley began the 2018 season with 7 receptions for 73 yards in a 16-8 road loss to the Caroline Panthers. During Week 6 against the Jacksonville Jaguars, he had 9 receptions for 101 yards and 2 touchdowns in the 40-7victory, In the regular-season finale against the New York Giants, he caught 6 passes for 94 yards along with the game-winning touchdown in the narrow 36-35 road victory.

He finished the 2018 season with 7 receptions for 672 yards and 3 touchdowns in 16 games and 4 starts. The Cowboys won the NFC East and earned the #4-seed in the NFC Playoffs. in the Wild Card Round against the Seattle Seahawks, he had 3 receptions for 28 yards in the 24-22 victory. In the Divisional Round against the Los Angeles Ram, he had a 15-yard reception in the 30-22 road loss.

He signed a 4 years,$29 million contract with the Buffalo Bills on March 13, 2019. He caught his first touchdown reception with the Bills in a 31–21 Week 6 win over the Miami Dolphins. Against the Dallas Cowboys, his former team, on Thanksgiving Day in Week 13, Beasley finished with six receptions for 110 yards and a touchdown as the Bills won on the road by a score of 26–15.

In week 16 against the New England Patriots, Beasley caught seven passes for 108 yards during the 24–17 road loss. He finished the 2019 season with 67 receptions for 778 yards and six touchdowns. In the Wild Card round against the Houston Texans, he had four receptions for 44 yards in the 22-19 overtime road loss.

Beasley was placed on the active/non-football injury list at the start of training camp on July 29, 2020. Beasley was moved back to the active roster on August 12. During a Week 3 35-32 victory over the Los Angeles Rams, Beasley had six receptions for 100 yards. Following Week 7 against the New York Jets, he had 11 receptions for 112 yards in the 18–10 road victory.

2 weeks later against the Denver Broncos, he recorded eight catches for 112 yards during the 48–19 road victory. He did not play in the regular-season finale against the Miami Dolphins due to a knee injury. After setting career-highs with 82 catches and 967 yards, he was named second-team All-Pro. He also scored 4 touchdowns.

In the Wild Card Round game against the Indianapolis Colts, Beasley caught seven passes for 57 yards in a 27–24 victory. His seven catches led the team and were a career-high for a playoff game. In the AFC Championship Game against the Kansas City Chiefs, Beasley recorded seven catches for 88 yards during the 38–24 road loss. After the season, Beasley revealed he had played through the 2020 playoffs with a partially broken fibula.

Beasley was placed in a COVID-19 safety protocol in August of 2012During Week 6 against the Tennessee Titans, Beasley caught 7passes for 88 yards and his first touchdown of the season in the narrow 34–31 road loss. Beasley was placed on the reserve/COVID-19 list after testing positive for the virus on December 21, 2021. During the 2022 offseason, on March 17, 2022, Beasley was given permission to seek trade outside Buffalo. He was released by the Bills.

In 2007 Beasley released the debut single 80 Stings. Beasley released his debut album The Autobiography produced by Victor “Phazz” Clark. The two teamed up to form ColdNation Records, an independent record label located in Frisco, Texas in 2018. In January 2020 he emancipate a new sign called sometimes.

Beasley announced on social media that while he understood the NFL’s interest in players getting the COVID-19 vaccine, he would forgo it nonetheless, even if it meant that he would have to end his playing career as a result. Beasley initially claimed he would stop discussing the issue publicly out of a desire to not be a “distraction” to his team in June 2021. Then he entered a public spat with Mark Cuban, with the Dallas Mavericks owner offering to buy Beasley’s wife a share in Pfizer stock if Beasley got vaccinated and promoted the vaccine on his social media platforms. He later entered a public back and forth with teammate and Bills’ defensive end Jerry Hughes over the NFL’s new vaccine rules.

Beasley was removed from the Buffalo Bills’ facility for close contact with a vaccinated COVID-19-positive staff member in August of 2021. He and teammate Isaiah McKenzie were fined $15,000 for violating the NFL’s COVID-19 protocol by not wearing masks on August 25. Beasley again took to social media to voice his complaints and was poked fun at by his teammate Stefon Diggs who said “15k is a lot of money lol…” to which Beasley responded by saying “Lol not for you. On August 27 he was placed back on the active roster. It was on that day that he publicly displayed a brain tattoo on his Instagram account. Beasley commented on the tattoo that it symbolized his desire for more ‘free thinking’ in the league.

Beasley took to his Twitter to criticize Bills fans who booed him at games due to his unvaccinated status on October 4, 2021. Then he deactivated his Twitter account the following week. ESPN reported that he had been fined multiple times for COVID-19 protocol violations, reaching a cumulative sum in the range of $100,000 on December 26, 2021.