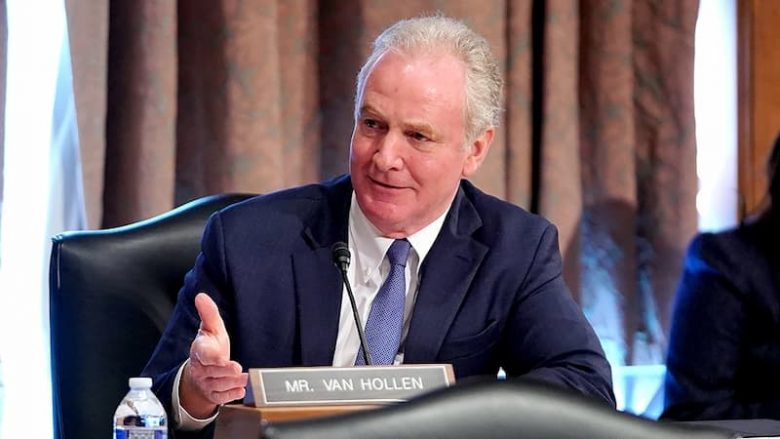 This article will answer every question you have about Chris Van Hollen. Below are some of the frequently asked questions about him.

Who is Chris Van Hollen?

Christopher Van Hollen Jr. is well-known as an American attorney and politician serving as the junior United States. Senator from Maryland since 2017. A member of the Democratic Party, Van Hollen served as the U.S. representative for Maryland’s 8th congressional district from 2003 to 2017.

He became the chair of the Democratic Congressional Campaign Committee in 2007. In this post, he was responsible for leading efforts to defend vulnerable Democrats and get more Democrats elected to Congress in 2008, which he did.

House Speaker Nancy Pelosi created a new leadership post, Assistant to the Speaker, in 2006 so that Van Hollen could be present at all leadership meetings. On November 17, 2010. He was elected ranking member of the Budget Committee. Pelosi appointed Van Hollen to the 12-member bipartisan Committee on Deficit Reduction with a mandate for finding major budget reductions by late 2011. Pelosi appointed Van Hollen to serve on the bicameral conference committee On October 17, 2013.

Van Hollen ran for the United States Senate in 2016 to replace retiring Senator Barbara Mikulski. He defeated Congresswoman Donna Edwards in the Democratic primary and won the general election 61 to 36 percent. Van Hollen served as chair of the Democratic Senatorial Campaign Committee (DSCC) from 2017 to 2019.

Van Hollen worked as a legislative assistant for defense and foreign policy to U.S. Senator Charles Mathias, a Republican from Maryland, from 1985 to 1987. He was also a staff member of the U.S. Senate Committee on Foreign Relations from 1987 to 1989. And a legislative advisor for federal affairs to Maryland Governor William Donald Schaefer from 1989 to 1991. He was admitted to the Maryland bar in 1990 and joined the law firm of Arent Fox.

Van Hollen served in the Maryland General Assembly from 1991 to 2003, first in the House of Delegates from 1991 to 95 and then in the State Senate from 1995 to 2003. He served on the Budget and Taxation Committee and the Health and Human Services Subcommittee. He led successful efforts to raise the tobacco tax, prohibit oil drilling in the Chesapeake Bay, and mandate trigger locks for guns in the Senate. And increase funding for education and healthcare. The Washington Post called Van Hollen 1 of the most accomplished members of the General Assembly in 2002.

How old is Chris Van Hollen?

Who are Chris Van Hollen’s Parents?

Van Hollen was born in Karachi, Pakistan to his parents Edith Eliza and Christopher Van Hollen. His father was a Foreign Service officer. While his mother worked in the Central Intelligence Agency and the State Department.

Does Chris Van Hollen have Siblings?

Van Hollen was raised with his three Siblings who are Cecilia Van Hollen and Caroline Van Hollen.

Van Hollen graduated from Swarthmore College with a Bachelor of Arts degree in philosophy. Then he completed his studies at Harvard University, where he earned a Master of Public Policy degree, concentrating in national security studies, from the John F. Kennedy School of Government in 1985. In 1990, he received a Juris Doctor from the Georgetown University Law Center.

Van Hollen is currently married to Katherine Van Hollen. The couple met while they were both students at Harvard University.

The couple has three children who are Anna, Nicholas, and Alexander.

Before his election, incumbent Connie Morella had victory 8 elections in the district despite being a Republican in a district that had swung heavily Democratic. His success was largely attributed to her politics for abortion rights, gay rights gun control, and increased environmental protections.

Following the 2010 census, the district was made slightly less Democratic. He lost a heavily Democratic spur of Montgomery Country to the neighboring 6th district and lost a share of Prince George’s County to the 4th district. In their place, the 8th absorbed a strongly Republican spur of Frederick County, as well as the southern part of even more Republican Carroll County.

The Committee for Education Funding, a nonpartisan education coalition founded in 1969, named Van Hollen its Outstanding New Member of the Year in 2003. The first bill Van Hollen introduces every session is the Keep Our Promise to America’s Children and Teachers (Keep Our PACT) Act.

Which would fully fund the No Child Left Behind and the Individuals with Disabilities Education Act. He introduced an amendment, which passed, that repealed a 9.5 percent loophole in student loans that had allowed lenders to pocket billions of taxpayer dollars. Now, that money is available for additional student loans.

Because many federal employees live in his district, Van Hollen has worked on a number of issues relating to them. He supported pay parity in pay raises for civilian employees and introduced an amendment, which passed, to block attempts to outsource federal jobs.

Official portrait as a U.S. representative, 2010
Van Hollen has secured federal funding for a number of local-interest projects, including transportation initiatives, local homeland security efforts, education programs, and community development projects. He and Adam Schiff (D-CA) often discuss issues of National Security on the floor of the House in tandem, with particular commentary on the wars in Afghanistan and Iraq.

When Charles Rangel was forced to resign as Chairman of the Committee on Ways and Means over ethics charges in March 2010. Van Hollen played a key role in having Sander Levin succeed to the Chairmanship over Pete Stark. Stark was the second-most experienced member of the committee while Levin was third. And party tradition would have made Stark chairman due to seniority. However, Van Hollen and other younger members saw Stark’s past intemperate comments as a liability to the Democrats in an election year.

Van Hollen introduced the campaign finance DISCLOSE Act on April 29, 2010. He reintroduced the bill for the 113th Congress on February 9, 2012.

Van Hollen sued the Federal Election Commission in April 2011. Charging it with regulatory capture and the creation of a loophole that allowed unlimited and undisclosed financing in the 2010 election season. According to Van Hollen, had it not been for the loophole, “much of the more than $135 million in secret contributions that funded expenditures would have been disclosed.”

Van Hollen defeated Republican Kathy Szeliga in the general election, 61% to 36%. He replaced Democrat Barbara Mikulski. Who had retired from the Senate after serving for 30 years.

Van Hollen has announced his candidacy for reelection in 2022.

Van Hollen was selected as the Chairman of the Democratic Senatorial Campaign Committee (DSCC) for the 2018 cycle shortly following the 2016 elections.

On January 6, 2021, Chris Van Hollen gave his Electoral College count remarks. Including his response to the storming of the Capitol.
He was walking to the Senate chambers to speak during the 2021 United States Electoral College vote count when he was stopped by U.S. Capitol Police telling him that the building was on lockdown due to the storming of the Capitol.

He backed to his office, where he remained for the duration of the attack. In the immediate wake of the insurrection, Van Hollen called Trump a “political arsonist” and said “I never thought we would live to see the day that violent mobs seized control of the Capitol. I cry for our country.”

As Van Hollen waited for the Capitol to be secured, he said he wanted an immediate investigation, calling the perpetrators “a violent mob.” He also contrasted the police’s treatment of the rioters with events that led to the use of tear gas on peaceful demonstrators, such as the Black Lives Matter protests.

Following Congress back to the session to count the electoral votes, he voted against objections raised by some Republican senators. Van Hollen also called for Trump’s “immediate removal” via the 20-5th Amendment to the United States Constitution and said, “we should have looked at that option much earlier.

According to his campaign website, Van Hollen supports an increase in the minimum wage, paid sick leave, an expansion of the Earned Income Tax Credit, and equal pay for women. An increase in the child care tax credit, and a financial transactions tax.

Van Hollen and Susan Collins cosponsored the Protect Our Elections Act in October 2018. Legislation that would block “any persons from foreign adversaries from owning or having control over vendors administering U.S. elections. And would make companies involved in administering elections reveal foreign owners and inform local, state, and federal authorities if said ownership changes. Companies failing to comply would face fines of $100,000.

Van Hollen voiced his opposition to Israel’s plan to annex parts of the Israeli-occupied West Bank in May 2020.

Van Hollen has been endorsed by the Brady Campaign to Prevent Gun Violence, a group that campaigns for more government regulation of guns. Van Hollen received a 0% from the Gun Owners of America (GOA) in 2006. He was against repealing portions of the Washington, D.C. Firearm Ban in September 2008.

Van Hollen introduced legislation for increased handgun licensing, specifically the requirement for permit-to-purchase licenses in 2015. This proposal was based on a similar law that exists in Maryland. On proposing the law, Van Hollen stated that “States require licenses to drive a car or even to fish in local rivers. So requiring a license to buy a deadly handgun is a common-sense step that could save countless lives.

In response to the 2017 Las Vegas shooting, Van Hollen co-sponsored a bill to ban bump stocks.

Van Hollen supports Obamacare and has defended it many times. He is also pro-abortion rights.

Van Hollen co-sponsored the Fallen Journalists Memorial Act in July 2019. A bill introduced by Ben Cardin and Rob Portman would create a privately funded memorial to be constructed on federal lands in Washington, D.C. to honor journalists and photographers. And broadcasters who died in the line of duty.

Van Hollen revealed that he had a minor stroke over that weekend and would stay at George Washington University Hospital for a few days on May 15, 2022. He further said he was expected to make a full recovery with no long-term effects and would be back to his work in the Senate later in the week.

Chris Van Hollen’s net worth or net income is estimated to be between $1 Million – $5 Million as of 2022. He has made such an amount of wealth from his primary career as a Politician.