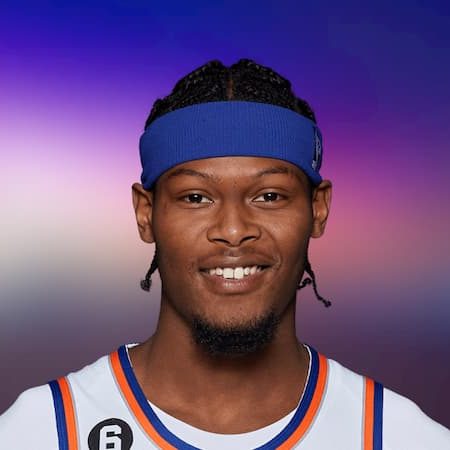 This article will answer every question you have about Cam Reddish. Below are some of the frequently asked questions about him.

Who is Cam Reddish?

Cameron Elijah Reddish abbreviated as Cam Reddish is a professional American basketball player for the New York Knicks of the NBA (National Basketball Association). While at college, he played college basketball for the Duke Blue Devils. He was selected by the Atlanta Hawks in the first round 10th overall round of the 2019 NBA draft.

Coming out of high school, he was rated as a five-star recruit and considered one of the top players in his class, thus earning Mr. Pennsylvania Basketball in his senior year. In addition, he was named to the 2018 McDonald’s All-American Boys Game, 2018 Jordan Brand Classic, and 2018 Nike Hoop Summit.

How Old Is Cam Reddish?

He is 23 years old as of October 2022, having been born on September 1, 1999, in Norristown, Pennsylvania. U.S. Reddish shares his birthdate with celebrities such as; Zendaya, Jungkook, Sam Hurley, Olivia Haschak, Romeo Beckham, and many more.

Who are Cam Reddish’s Parents?

He was born to Robert Reddish (Father) and Zanthia (Mother).

Does Cam Reddish have Siblings?

He has a younger brother by the name of Aaron, who played high school basketball for Collin Saxton’s former team.

He received his high school education at The Haverford School and transferred to Westtown School. After high school, he attended Duke University.

As a freshman, he attended The Haverford School before transferring to Westtown School where he teamed up with Class of 2017 five-star recruit and current NBA player Mohamed Bamba. As a junior, he averaged 16. 2 points per game and led the Moose to a Friend’s School League title. During the summer of 2017, he averaged 23.8 points, 7.6 rebounds, and 3.1 assists for his Amateur Athletic Union (AAU) team. Also, he played for the United States men’s national under-19 basketball team. Originally, he was going to play for the under-17 team the previous year but did not make the team because of an injury. After his senior season, he was named 2018 Mr. Pennsylvania Basketball.

He was a five-star recruit. And 247Sports ranked him as the third-best in the 2018 class and the third-best recruit in the class of 2018 by ESPN. On September 1, 2017, he committed to Duke University where he was joined by fellow top-3 recruits RJ Barrett and Zion Williamson.

A Career with the New York Knicks (2022 to present)

The Hawks traded Reddish along with Solomon Hill, a 2025 second-round draft pick and cash consideration to the New York Knicks on January 13, 2022. This was in exchange for Kevin Knox and a protected future first-round pick. On January 23, he made his Knicks debut, logging two points and two rebounds in five minutes. The New York Knicks announced on March 10, that Reddish would miss the rest of the season due to a right shoulder injury.

Cam Reddish’s Salary and Net Worth