By Ephantus Gichuki on Wednesday, February 2, 2022 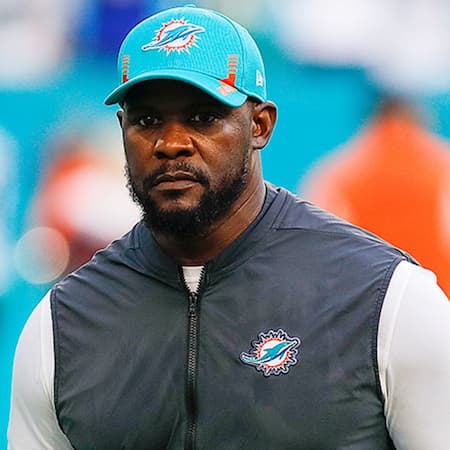 This article will answer every question you have about Brian Flores. Below are some of the frequently asked questions about him.

Who is Brian Flores?

Brian Flores is a popular and well-known coach. Flores is a coach in the National Football League. Brian is Honduran-American.

Flores is a head coach who has served in various teams. During the years 2008 to 2018, Brian served as an assistant coach with the New England Patriots. After a decade of being an assistant coach, Flores then became a head coach coaching the Miami Dolphins from 2019 to 2021.
Brian was born and grew up in Brownsville a section of Brooklyn, New York. He was born to Honduran parents.

How Old is Brian Flores?

Brian is aged 40 years old as of now, having been born on February 24, 1981, in the Brownsville section of Brooklyn, New York City, United States. Flores shares his birthdate with celebrities such as Rachel Levin, Steve Jobs, Floyd Mayweather Jr., Brittany Raymond, Bailey Sok among others.

Who are Brian Flores parents

Flore’s father is Raul Flores and his mother is Maria Flores. Brian’s father worked as a merchant marine.

Does Brian Flores have any siblings?

Brian received his high school education at Poly Prep New York and his college education which he received at Boston College.

Flores has been married to the love of his life Jennifer Maria Duncan Flores. Jennifer is rarely heard in public or seen. Jennifer and Brian tied knots in 2009. His wife Jennifer was born in 1980.

Brian together with Flores is blessed with 3 children inclusive of 1 daughter and 2 sons namely: Liliana, Miles, and Maxwell.

Brian started his career at the age of 23 in 2004 joining the Patriots as a scouting assistant. In 2006, Flores became a pro scout thereby getting him promoted to Bill Belichick’s coaching staff in 2008. In 2010, Brian’s title changed to being an assistant coach offense/special teams. Ahead of the 2016 season, Flores became linebackers coach.
Brian in Miami Dolphins
After winning their 6th Super Bowl title with the patriots and after 15 years of service, Flores was hired as the 12th head coach that was on February 4, 2019.

As a head coach, Flores team the Dolphins lost to the Baltimore Ravens 10-59 on September 8, 2019. The New England Patriots Flores former team won against the Dolphins 43-0 in week two. Two months without a win, Brian recorded his first win home victory over New York Jets in a 26-18 win on November 3, 2019. The Dolphins led by Flores, finished the 2019 season in 4th place in the AFC East.

Flores team the Dolphins recorded a loss of scores 21-11 against New England Patriots the division rivals and a loss to Buffalo Bills by scores 31-28. Brian’s first win of the season was against the Jacksonville Jaguars by a score of 31-13. This was also the Dolphin’s first win against Jacksonville since 2014. After a loss to Buffalo Bills in week 17 of scores 56-26 on January 3, 2021, the Dolphins were eliminated from playoff contention for the 4th consecutive season.

Brian and his team the Dolphins started the season with a win against the New England Patriots a win of scores 17-16. On October 17, 2021, despite leading 13-3 in the first half, Flores team lost in the second half to scores 20-23 after traveling to London to play against Jacksonville Jaguars. Brian’s team the Dolphins ended their 2021 season with a win over the Playoff Bound Patriots on January 9, 2022, defeating them 33-24. Flores has two years left in his contract was fired by the Dolphins on January 10, 2022, after a three-season surprise move.

After getting fired, Flores filed a class-action lawsuit against the NFL, Dolphins, Giants, and Broncos organizations alleging racial discrimination on February 1, 2022.

Brian Flores is a Miami Dolphins head coach, has got a good salary of $3 million and a net worth of estimated half a billion dollars to $700,000 million.