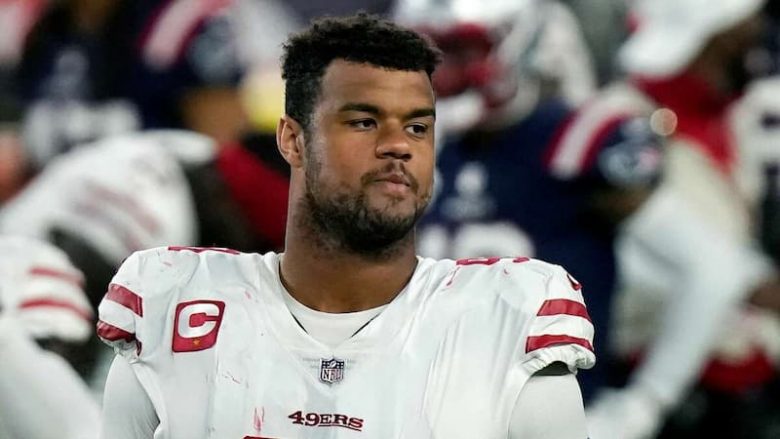 This article will answer every question you have about Arik Armstead. Below are some of the frequently asked questions about him.

Who is Arik Armstead?

Arik Armstead is a professional American football defensive end for the San Francisco 49ers of the NFL (National Football League). While at college, he played college football at Oregon and was drafted in the first round of the 2015 NFL Draft by the 49ers.

How Old Is Arik Armstead?

He is 28 years old as of October 2022, having been born on November 15, 1993, in Sacramento, California, U.S. Arik shares his birthdate with celebrities such as; Jeffree Star, Jenny Popach, Jackson Passaglia, MatPat, Shailene Woodley, and many more.

Who are Arik Armstead’s Parents?

He was born to Guss Armstead (Father) and Christa Armstead (Mother).

Does Arik Armstead have Siblings?

He has an elder brother by the name of Armond Armstead (born on August 3, 1990) a former defensive tackle for the Toronto Argonauts of the Canadian Football League and the New England Patriots of the NFL.

He received his high school education at Pleasant Grove High School. After high school, he attended The University of Oregon.

As a true freshman, he played in all 13 games in 2012 making one start. He finished the 2012 season with 26 tackles and a half-sack. And during the spring he joined the Ducks basketball team where he redshirted his first year. As a sophomore in 2013, he played in 13 games recording 15 tackles and one sack. During the spring, he rejoined the basketball team. However, he quit basketball after playing one game in order to focus on football.

He was selected in the first round (17th overall) in the 2015 NFL Draft by the San Francisco 49ers. Thus he was the fourth defensive end selected in 2015.

He was unable to attend training camp and organizes team activities until Oregon’s school year had concluded due to the NFL’s policy that prohibits rookies from joining teams until their year is officially completed. Upon his arrival, he was competing for the job as the starting defensive end against Quinton Dial, Darnell Dockett, Glenn Dorsey, and Tank Carradine.

He then made his NFL debut in the season-opening 20-3 win against the Minnesota Vikings. During the game, he recorded one tackle for loss. He went on to record three combine tackles and made his first NFL sack on quarterback Carson Palmer for a four-yard during a 47-7 loss to the Arizona Cardinals in week 3. In week 17, he earned his first NFL start in a 19-16 overtime win over the St. Louis Rams and made a solo tackle. Overall, he finished his rookie year with 19 combined tackles (14 solos) and two sacks in 16 games played with one game started.

The 49ers hired Chip Kelly as their new head coach. As a result, Arik competed to be the starting defensive end after Glenn Dorsey was moved to nose tackle. In the season-opener against the Los Angeles Rams, he recorded his first sack of the season on Case Keenum during the 28-0 win. However, he was placed on the injured reserve on November 8, 2016, with a left shoulder injury. Overall, he finished the season with 15 combined tackles (nine solos), a forced fumble, and 2.5 sacks in eight games and four starts.

In a game against the Seattle Seahawks in week 2, he recorded his first and only full sack of the season on Russell Wilson during the 12-9 loss. However, he was placed on injured reserve on October 17, 2017, after suffering a broken hand in week 6. Thus he went on to finish his third season with 16 combined tackles (8 solos), 1.5 sacks, and a pass deflection in six games.

The 49ers picked up the fifth-year option of Arik’s contract on April 30, 2018. He recorded his first sack of the season during week 3 against the Kansas City Chiefs on Patrick Mahomes in the 38-27 loss. In a game against the Arizona Cardinals, he sacked rookie quarterback Josh Rosen once during the 18-15 loss. Overall, he finished the season with 48 tackles (33 solos) and three sacks in 16 games and starts.

In the season opener against the Tampa Bay Buccaneers, he recorded his first sack of the season on Jameis Winston during the 31-17 road win. During week 6 against the Los Angeles Rams, he recorded a season-high 6 tackles and half a sack on Jared Goff. Also, he recovered a fumble lost by Goff during the 20-7 victory. He went on to sack Kyle Allen twice during the 51-13 win against the Carolina Panthers. Later after two weeks, he sacked Russel Wilson 1.5 times during the 27-24 overtime loss against the Seattle Seahawks on Monday Night Football. The 2019 season was a breakout for Arik. As he recorded 54 tackles (32 solos), a team-leading 10 sacks, two forced fumbles, and a fumble recovery in 16 games and starts. Also, he ranked second on the 49ers regarding tackles for loss.

Arik Armstead’s Salary and Net Worth

He has an average annual salary of $17 million and a net worth of $26.8 million.