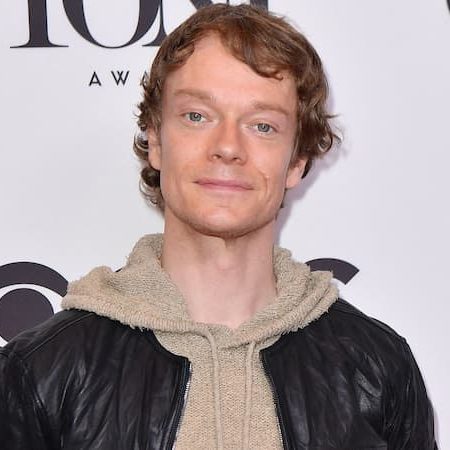 This article will answer every question you have about Alfie Allen. Below are some of the frequently asked questions about him.

Who is Alfie Allen?

Alfie Evan Allen is an English prominent actor. From 2011 to 2019, he portrayed Theon Greyjoy on all eight seasons of the HBO fantasy series Game of Thrones for which he received a nomination for the Primetime Emmy Award for Oustanding Supporting Actor in a Drama Series in 2019.

How Old Is Alfie Allen?

Who are Alfie Allen’s Parents?

He was born to Keith Allen (Father, born on September 2, 1953) a Welsh actor, pantomime star, and television presenter. And Alison Owen (Mother, born on February 18, 1961) is an English film producer.

Does Alfie Allen have Siblings?

He has three siblings. Three sisters by the name Lily Allen (born on May 2, 1985, an English singer-songwriter and actress), Gala Talbott (born in 1991), and Teddie-Rose Malleson-Allen (born in 2006).

He received his high school education at Windlesham House School. After high school, he attended St. John’s College and Fine Arts College, where he studied for his A-levels.

News on the internet shows that he is possibly single. However, he has been in several relationships.

He has a kid with his ex-girlfriend, Allie Teilz (an American DJ and model). A daughter by the name of Arrow (born in October 2018).

His first professional appearance was in 1998 in a one-off Channel 4 comedy, You Are Here, co-written by Matt Lucas and David Walliams. That same year, he and his sister Lily appeared in the 1998 film Elizabeth which was produced by their mother. His early work included small roles in Agent Cody Banks 2: Destination Londo directed by his uncle: the film Atonement, and in BBC1’s historical hospital drama, Casualty 1907, as Nobby Clark. Starting on January 31, 2008, in Chichester, he took over Daniel Radcliffe’s role in a revival of Equus on a nationwide tour.

In April 2009, he co-starred with then-partner Jaime Winstone in the music video for “Dust Devil” by Madness. Moreover, he had a role in the BBC2 film, Freefall. He then continued to work in films appearing in Soulboy, The Kid, Freestyle, and Powder in 2010. He came to international attention in 2011 when he was cast as Theon Greyjoy in the HBO fantasy series Game of Thrones. The series is an adaptation of George R.R. Martin’s A Song of Ice and Fire. Originally, he auditioned for the role of Jon Snow and he appeared as a series regular for 8 seasons and was nominated for a Primetime Emmy Award for Best Supporting Actor in 2019 for the show’s final season.

Next, he starred in the 2012 British thriller Confine and then opposite Keanu Reeves in the 2014 film John Wick. In 2016, he filmed a two-part documentary for the History Channel titled Football: A Brief History, about the roots of association football, directed by Mike Christie. That same year, he played in the BBC Two 1940s-set miniseries Close to the Ene,y as Ringwood. He went on to join the London production of Jessee Eisenberg’s The Spoils at Trafalgar Studios. In 2018, he co-starred as Lynch in the sci-fi sequel The Predator and in Taika Waititi’s Oscar-nominated dark comedy Jojo Rabbit as Finkel as well as in the coming-of-age film How to Build a Girl as John Kite in 2019.

Moreover, he had a recurring as Isaac Pincher in the third series of the period drama Harlots. He then appeared as Brett Collins in the ITV crime drama White House Farm in 2020. In 2022, he made his Broadway debut when he took over the role of Mooney from Dan Stevens in Martin McDonagh’s Hangmen at John Golden Theatre. Because of his performance, he received a Tony Award nomination for Best Featured Actor in a Play. Also, he is set to star in the BBC One World War II miniseries SAS: Rogue Heroes as Jock Lewes.

Alfie Allen’s Salary and Net Worth